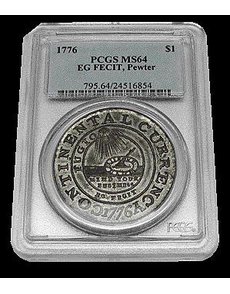 PCGS graded Garry Cucci’s 1776 Continental Currency dollar in pewter Mint State 64. The Vermont collector purchased the coin in 1969 for $1, but did not receive confirmation that it is genuine until this year. 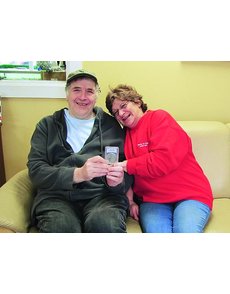 Garry and Linda Cucci of Salisbury, Vt., are all smiles after learning that a spur-of-the-moment coin purchase for $1 has turned into a windfall. The coin is a 1776 Continental Currency dollar in pewter.

Editor's note: After this article was published in the print and digital editions of the March 19 issue of Coin World, the coin was sold twice.

David G. Carr of Rare Coins of North America LLC, North Reading, Mass., purchased the coin March 2 for “in excess of $120,000.” The sale was brokered by John Martin of Martin's Coins and Jewelry.

Carr sold the coin March 6 for an undisclosed price to a collector who has chosen to remain anonymous.

A Vermont man’s $1 spur-of-the-moment purchase of an “odd-looking” coin more than 40 years ago has proven to be the best deal of his collecting life: an authentic 1776 Continental Currency dollar in pewter.

The coin has been certified by Professional Coin Grading Service as genuine and graded as Mint State 64.

Garry Cucci of Salisbury, Vt., first got interested in coin collecting when he found and purchased an odd-looking silver dollar-sized coin at a New Jersey flea market back in 1969. It was “cool-looking and interesting because the date on it was 1776,” Cucci said.

He liked it, so he paid the vendor’s asking price of $1 for it and “put it in my wallet. It became my good luck coin, a coin of hope.” For the next 43 years, he carried it there, taking it out for luck whenever he went to a casino. Well, it turned out this coin was even luckier than he could have dreamed.

Cucci wondered off and on over the years if it might be real. He showed it to a coin dealer in 1980, who looked briefly at it and said, “Ahhh, it’s not real,” and handed it back to him. Another dealer he sought out in 1996 in New Jersey looked at it and said, “I really don’t know.” So Cucci put the coin back in his wallet in its paper envelope. And that was pretty much the end of it until February of this year.

He laughed recently: “I’m actually surprised the coin never got lost. I’ve moved five times since I bought it.”

In the 43 years that he’s owned the coin, he had researched it sporadically, still wondering if there was a chance it could be genuine. Buying the coin spurred an interest in numismatics, so he began buying various U.S. coins when they piqued his interest.

Fast forward to 2012: Cucci was speaking with a friend about the coin, and she told him to go to John Martin at Martin’s Coins & Jewelry in South Burlington. “He’s genuine and honest,” according to Cucci.

Cucci’s wife, Linda, encouraged him to bring the coin to Martin on their next trip to South Burlington. So he did.

The coin, a pewter Continental Currency dollar, is roughly the size of a silver dollar, and was struck in 1776. It is an often copied coin, with many replicas in existence.

Store owner Martin looked at the coin, and told Cucci: “I’ve seen over 100 fakes intended to deceive collectors along with copies of Continental dollars in my 20 years in business, and this one looks good. If you’ll let me send it in to PCGS, then we can find out for sure for you.”

Unlike a “pocket piece,” where such a coin is usually carried loose in one’s pocket and is subject to extensive wear, this coin seemed to have escaped wear. The coin exhibits very nice striking details and plenty of luster.

Cucci said he looked at his wife, and she told him he should let Martin’s Coins send it in for him. Cucci agreed, so Martin sent it in for grading and authentication. On Feb. 23, the coin arrived back from PCGS. Martin called Garry at home.

“Are you sitting down?” John asked Cucci.

How such a coin could escape wear after 43 years in a person’s wallet is anyone’s guess, but perhaps it has to do with the composition of the coin along with Cucci’s careful wrapping of the coin in a paper envelope before putting it back in his wallet. It certainly makes one wonder if the coin would have graded even higher in Mint State had it been “properly” stored.

After hearing Martin’s estimate of the value of the coin, “I was starting to hyperventilate,” Cucci said.

After getting off the phone, Garry Cucci says he and Linda did a “happy dance.”

The Continental Currency pieces were likely made to serve in place of paper money. Several different obverse dies were created, including one that misspelled the word “currency” with only one “r.”

The obverse of the coin depicts a sundial plus inscriptions and the date. Cucci’s coin bears the obverse inscription EG FECIT, (“fecit” is Latin for “made it”), which is attributed to Elisha Gallaudet.

The reverse of the coin includes 13 interlocking rings, each with the name of one of the 13 original states. This design element was suggested by Benjamin Franklin.

The coins were minted in pewter, brass and silver, with examples struck in the latter two metals being extremely rare. Mintage of the coins are unknown.

Martin’s Coins & Jewelry is handling the sale of the coin for Cucci. Martin says he already has several interested parties submitting offers on the coin.

Ever since getting the good news, Cucci says with a big smile, “I’ve been getting $100,000 kisses from my wife!” And when Garry and Linda stopped by Martin’s shop the last week of February to see the coin in its holder, John presented Garry with a memento — a replica of a Continental dollar coin. ¦