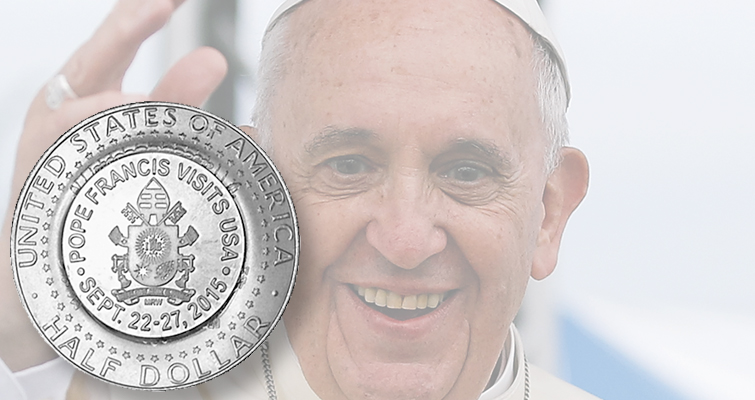 Collector Mel Wacks has issued his first counterstamped coin in more than 30 years, to celebrate the visit of Pope Francis to the United States in September.

From 1976 through 1984, Mel Wacks designed and counterstamped more than 10,000 coins for more than 20 occasions including the Los Angeles Olympics, President Reagan’s Inauguration, Freedom for the American Hostages, Pope John Paul II’s visits to Mexico and the USA, and more.

A catalog of these counterstamped coins was published in the TAMS Journal (March-April 2011) and appears online; the pieces are sometimes offered for sale on eBay.

Now, for the first time in more than 30 years, Wacks is producing new counterstamped coins. These will commemorate Pope Francis’ historic first trip to the United States, from Sept. 22 to 27, when he will visit Washington, D.C., New York and Philadelphia.

In a letter accompanying the first counterstamped coin sent to Pope Francis, Wacks wrote, “I have been inspired by your messages in behalf of the earth and the poor. A portion of the profits will be given to an appropriate Catholic charity.”

A maximum of 500 Brilliant Uncirculated 2015 Kennedy half dollars (from both Philadelphia and Denver Mints) will be counterstamped with the coat of arms of Pope Francis with his personal motto below: MISERANDO ATQUE ELIGENDO (Latin for “By giving mercy and by choosing”).

Pope Francis’ coat of arms displays three emblems. In reference to Francis being a Jesuit, the uppermost emblem — a radiating sun, within which is the IHS christogram (a monogram of the holy name of Jesus) — is that of the Society of Jesus. Below the Jesuit emblem is an eight-pointed star, which is a long-standing symbol of the Virgin Mary, and a spikenard (or nard flower) representing Saint Joseph. External ornaments include the Papal miter above and the crossed keys of Saint Peter with cords.

The circumferential inscription reads: POPE FRANCIS VISITS USA/SEPT. 22-27, 2015. Mel Wacks’ initials MRW are below the shield. Examples of these limited edition Pope Francis counterstamped Brilliant Uncirculated 2015 Kennedy half dollars are available for $39.50 postpaid from Mel Wacks, 5189 Jeffdale Ave., Woodland Hills, CA 91364 or by telephoning him at 818-225-1348.

Mention that you read about it in Coin World and take a 25 percent discount. For further information email Wacks.