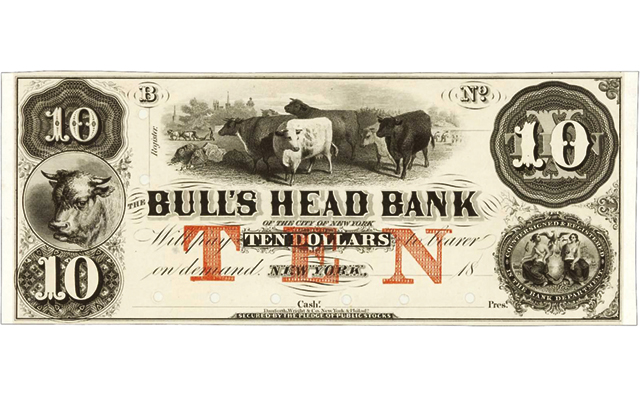 $10 proof for the Bull's Head Bank of the City of New York graded Choice Uncirculated will be in the Stack's Bowers Galleries Aug. 7 sale during the ANA convention in Rosemont, Ill.

Stack's Bowers Galleries will be offering a $10 proof for Bull’s Head Bank of the City of New York during its Aug. 7 sale during the ANA convention in Rosemont, Ill.

A large vignette of a bull’s head along with a view of a herd of cattle illustrates the $10 proof for the Bull’s Head Bank of the City of New York.

The piece, graded by the auction firm as Choice Uncirculated, is on India paper mounted on archive book card. The piece is from the Peter Mayer Collection and has an estimate of between $2,000 and $3,000.

The vignette was “reworked by the engraver to accommodate its use on bank notes,” according to Interesting Notes About Vignettes III by Roger H. Durand.

The vignette was inspired by a 1647 painting titled The Young Bull by Dutch artist Paulus Potter. The life-size painting is on display at the art museum Mauritshuis in The Hague, Netherlands.