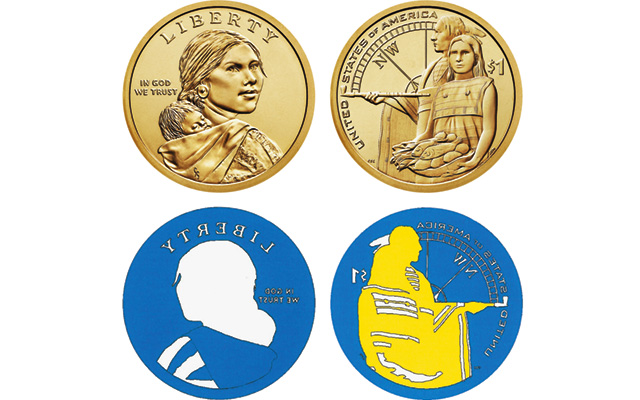 Offered at $13.95 with a product limit of 50,000, the set comprises the Enhanced Uncirculated 2014-D Native American dollar, struck at the Denver Mint, and a Series 2013 $1 Federal Reserve note.

The coin illustrated is a Native American dollar from the 2014 Uncirculated Mint set and is presented here to show the areas of the coin where the different finishes will be seen. The coin image is not an example of the coin from the set. The U.S. Mint does not yet have for distribution images of the actual coin in the American $1 Coin and Currency set.

According to U.S. Mint officials, a wire brush application, to result in a bright finish during striking, was executed to both the obverse and reverse fields and artwork on the dies.

"Being an Enhanced Uncirculated program, the base finish on the obverse & reverse was wire brushed," according to Mint officials. "This was developed specifically for this program and implemented into production for the first time. This approach gives the coins a bright finish without appearing polished, like proof coins do.

The obverse and reverse artwork was then laser-frosted according to the following color key: