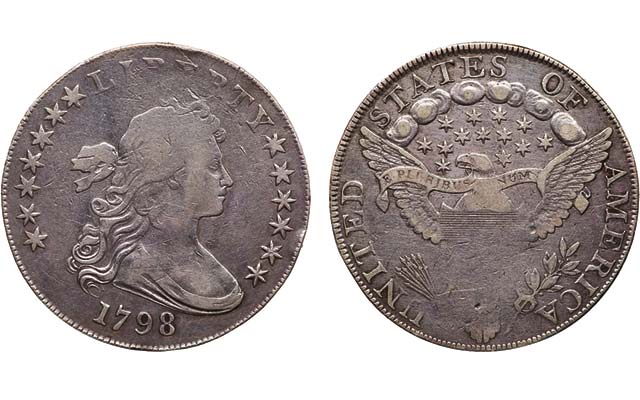 The coin, encapsulated as Genuine, Very Fine Details, Cleaned, has been assigned variety attribution numbers Bolender 34, according to United States Early Silver Dollars from 1794 to 1803 by M.H. Bolender, and Bowers-Borckart 126, according to Silver Dollars & Trade Dollars of the United States: A Complete Encyclopedia by Q. David Bowers, with contributions by Mark Borckardt.

The coin has been consigned by Scott Mitchell from Scott Mitchell Numismatic Associates LLC  in Garden City, N.Y., to the May 31 to June 3 auction by Ira & Larry Goldberg Coins & Collectibles.

Mitchell recently acquired his new discovery unattributed from one of the many country auctions that he attends throughout the Northeast.

The coin bears the distinct reverse striking weakness at the shield and tail feathers associated with this reverse die (most notably on the small number of surviving examples of BB-103 marriage).

Likewise, the obverse shows significant striking softness at the corresponding area of the design; that being the top of Liberty’s head and the bottom of the letters LIBER in LIBERTY.

Both the obverse and the reverse are struck from an early state of each die, and die progression specialists can use this new coin as a valuable means by which to further their research into the order in which these early die marriages were produced.

Mitchell realized that he had never encountered a silver dollar of this date with the exact striking characteristics of this new discovery when he acquired it, but he did not realize the magnitude of his purchase until he attempted to attribute the coin on the following day. The new die marriage was further confirmed by Jason Villareal, a variety specialist and auction manager for Ira & Larry Goldberg Coins & Collectibles.

“It is somewhat important to note that the strike on the reverse of this new 1798 B-34, BB-126 die marriage is very similar to the strike on the 1798 B-18, BB-103 marriage,” according to  Perkins. “The plate coin on page 285 of the original, 1993 edition of the Bowers-Borckardt silver dollar encyclopedia illustrates this. The coin illustrated on page 283 in the book for the B-18, BB-103 die marriage is the Jules Reiver specimen.

“You can see the similarities in the striking on the eagle and shield on the reverse, and the central and upper portrait of Liberty on the obverse. There are only six specimens of the extremely rare B-18, BB-103 die marriage known to me, with the Reiver specimen mentioned being the finest known (graded PCGS F-15). All six are in lower grades, and all six have a similar strike and look.”

Perkins said there are now 120 known die marriages of the 1794 to 1803 circulation-strike silver dollars.