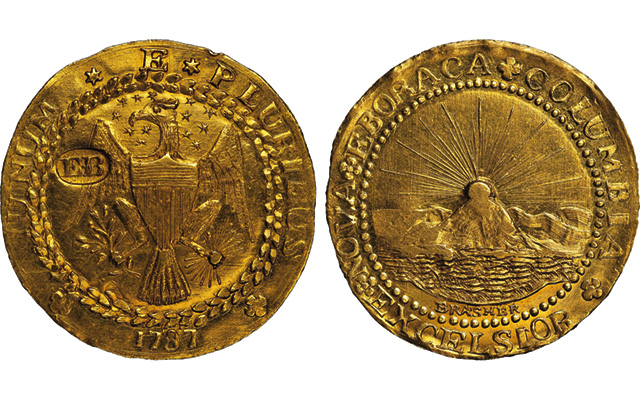 Sold for $4,582,500, this 1787-dated gold Brasher doubloon was one of a dozen United States coins that crossed the million dollar mark at auctions in 2014

From a million dollars paid for an early American large cent to $4.5 million paid for the first gold coin struck for the young United States, the market for high-quality, historic U.S. rare coins set another record for numismatic auctions in 2014.

The overall U.S. rare coin market was estimated at about $5 billion, and a dozen coins sold for $1 million or more each at public auctions in 2014, according to a year-end tabulation by the Professional Numismatists Guild.

The PNG is a nonprofit organization composed of many of the country's top rare coin and paper money dealers.

"We estimate the overall coin market in the U.S. at about $5 billion in 2014.  That includes auctions and private transactions made at coin shows, by mail order, online and at coin stores, but does not include numismatic bullion items or the modern coins sold directly by the United States Mint," explained Hanlon.

"In the second half of the year, there was some softness in prices for relatively 'common' coins as gold and silver prices dropped, but the market for truly high-quality, historic rare U.S. coins continued to do quite well," he said.

These are the 12 U.S. rare coins purchased by winning bidders for $1 million or higher in 2014, and the auction companies that sold them:

All prices include the buyer's premium, if any, to reflect the actual total prices paid by the winning bidders.  The PNG survey did not include 2014 auctions of paper money or coins produced by other countries ("world coins"), two areas of the numismatic marketplace that also experienced record prices for many items.

With the continuing trend of high prices for high-quality, historic rare coins, Hanlon cautioned: "We have an important saying in the numismatic marketplace. If you don't know rare coins, you'd better know your rare coin dealer."

Founded in 1955, the Professional Numismatists Guild is composed of many of the country's top rare coin and paper money dealers.  PNG member-dealers must adhere to a strict code of ethics in the buying and selling of numismatic merchandise.  A complete listing of PNG member-dealers is available online.

For additional information about the Professional Numismatists Guild, visit online or telephone PNG headquarters in Temecula, Calif., at 951-587-8300.