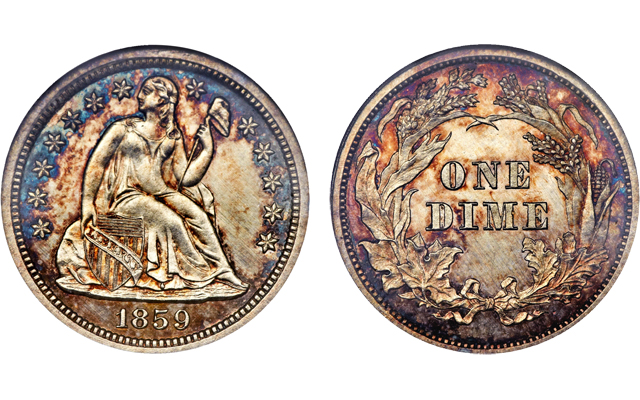 The transitional 1859 Seated Liberty dime is considered to be a pattern.

The transitional 1859 Seated Liberty dime, lacking any reference to nation of issue because of design changes, is known by fewer than 20 examples.

Listed as Judd 233 in United States Patterns Coins by J. Hewitt Judd, edited by Q. David Bowers, with research associate Saul Teichman, the piece is nicknamed "transitional" because the coin appears without the inscription UNITED STATES OF AMERICA. The inscription originally appeared on the reverse of the Seated Liberty dime, from the coin's introduction in 1837 through 1859 and 1860 (the end date of the design's use differs by Mint facility). The inscription was moved to a modified obverse in 1860 when a totally new, Cereal Wreath reverse was introduced.

More details can be found on Gerry Fortin’s SeatedDimeVarieties.com website.