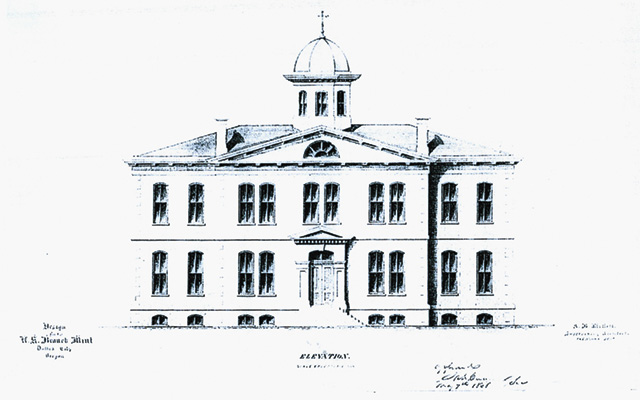 Image of original blueprint illustrates what The Dalles Mint in Oregon would have looked like had its construction been completed.

Editor's note: This is one in a series of Coin World Collector Basics posts on facilities under the U.S. Mint's jurisdiction.

With gold discovered in Idaho and a gold rush in eastern Oregon, the need arose in 1860 in the Pacific Northwest for a Mint to produce coinage.

Currency in The Dalles came in the form of raw gold dust that often was shipped to the San Francisco Mint for processing and conversion into federal gold coins.

Demand grew for construction of a Mint closer to the gold mines. Legislation was passed by Congress on July 4, 1864, which authorized a new Branch Mint of the United States at The Dalles, then known as Dalles City, for the production of gold and silver coins.

The superintendent of the planned Branch Mint, William Logan, was en route to The Dalles aboard the SS Brother Jonathan on July 30, 1865, when that ship sank near Crescent City, Calif., taking his life, along with many others (and a shipment of gold).

The basement and first floor of the planned two-story Mint were completed in 1869. Further construction was suspended in 1870 and the project abandoned in 1873 amid the waning gold rush. The Dalles Mint became obsolete before any coins could be produced.

The structure was turned over in 1875 by the federal government to the state of Oregon, which sold it to private interests.