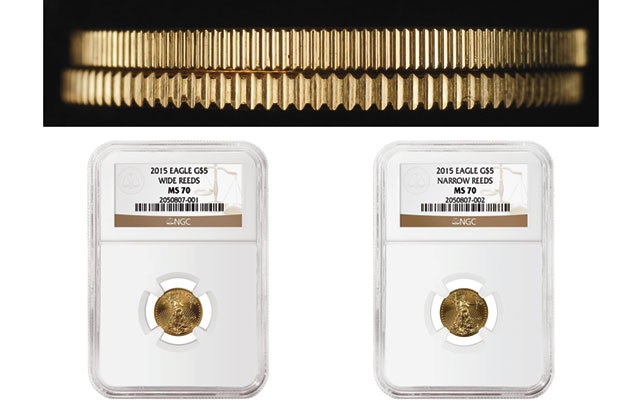 The Narrow and Wide Reeds edge styles appearing on 2015 tenth-ounce gold American Eagle bullion coins are variants and not errors.

Numismatist Thomas K. DeLorey speculated that the Narrow Reeds edge variant could have been from the use of a collar from the tenth-ounce American Buffalo gold bullion coins last struck at the West Point Mint in 2008.

"Reeding collars are considered standard tooling," Stump responded vie email. "Multiple collars were used to produce the 2015 tenth-ounce gold Eagles. The U.S. Mint does not consider the coin an error, just a variant.  There were several thousand of the variant produced."

Still waiting to be answered is how the Mint decides the number of edge reeds to appear on a reeded edge coin, the actual number of reeds per Narrow Reeds and Wide Reeds collar dies and why there is not a standard reed configuration for the collar dies.

Stump said when a collar die reaches the end of its productive life, the collar die is pulled from service and scrapped.

The collar die is a third die in the coin production process. The collar die restrains the metal flow created by the striking of a planchet between an obverse and reverse die. The collar imparts whatever design comprises the edge device. This could be reeding, a plain flat surface, or lettering or other ornamentation.