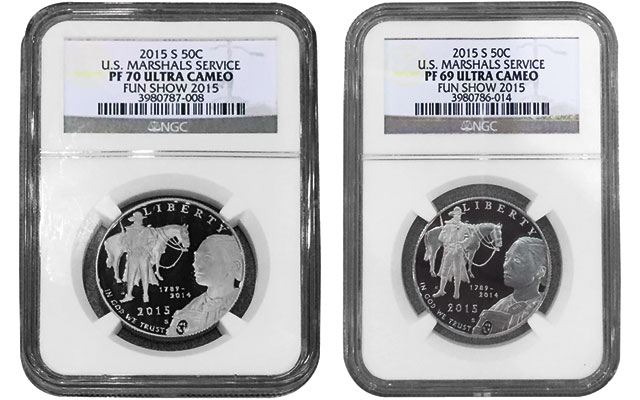 A system error with the U.S. Mint's website allowed for the public sale and delivery of 146 Proof 2015-S U.S. Marshals Service 225th Anniversary half dollars up to a month before their scheduled Jan. 29 release.

"Once the United States Mint learned of the problem, the causes were quickly identified and immediately remediated," Adam Stump, the U.S. Mint's deputy director for the Office of Corporate Communications, responded to Coin World by email Jan. 14. "The Mint is in the process of making changes to our system and our processes and procedures to ensure that this situation does not re-occur."

New York dealer Eli Meisels was able to purchase and receive delivery for 99 of the copper-nickel clad half dollars. Meisels took all 99 coins to the Jan 8 to 11 Florida United Numismatists convention in Orlando where Numismatic Guaranty Corp. graded and encapsulated Meisels' coins with a custom label tied to their certification at the convention.

??The United States Mint has found that some 2015 U.S. Marshals Service 225th Anniversary Coins were inadvertently ordered and shipped to a few customers prior to the scheduled on-sale date of Jan. 29, 2015.

??These early sales are the result of a system error that has been corrected.

??All U.S. Marshals 225th Anniversary Commemorative Coins will be available as scheduled at noon (Eastern Time) on Jan. 29, 2015.

??Of the coins sold, 26 coins were sold to 12 customers in 2014. The United States Mint is working with these customers, our legal counsel and the recipient organizations for this program to ensure that sales for these coins comply with legislative requirements regarding surcharges.

Stump noted that the system error did not allow for placement of any orders for the Uncirculated copper-nickel clad half dollars, or Proof and Uncirculated versions of the gold $5 coins or silver dollars.