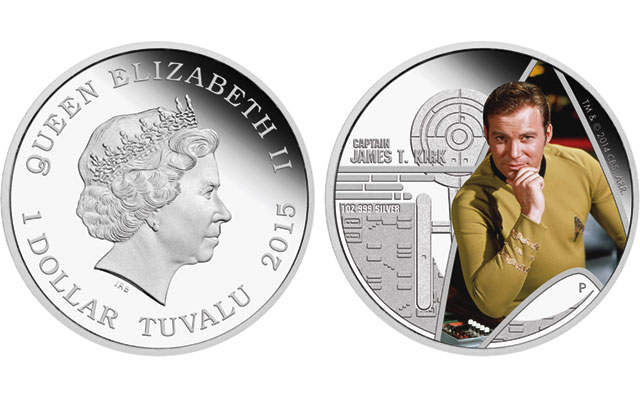 William Shatner as Captain James T. Kirk appears on the reverse of a new release from the Perth Mint. 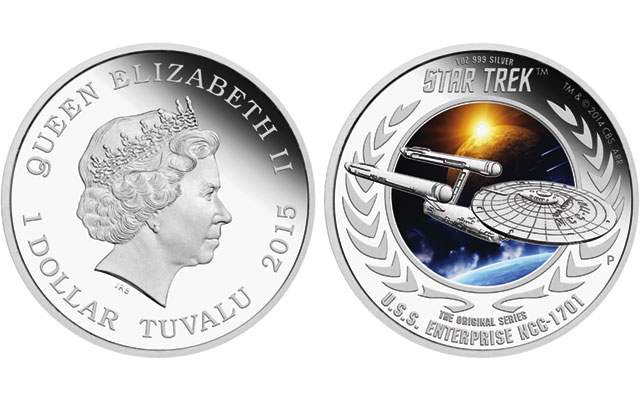 The other Perth Mint coin commemorating "Star Trek: The Original Series" depicts the USS Enterprise on its reverse.

The Perth Mint is going where no mint has gone before. (So to speak.)

Two silver dollar coins commmemorating Star Trek: The Original Series — one portraying the iconic Captain James T. Kirk as played by William Shatner, and the other depicting the fictional starship USS Enterprise — are among the Perth Mint's February releases.

The Proof 1-ounce, .999 fine silver dollar coins are listed individually at $115 and as a pair at $230. They will be made available on Feb. 16, according to the Perth Mint's monthly product bulletin.

"The Captain James T. Kirk coin's reverse portrays a colour image of William Shatner as Captain James Tiberius Kirk as he appeared in Star Trek, against a representation of the U.S.S. Enterprise and the inscription CAPTAIN JAMES T. KIRK," the Perth Mint's online description reads.

"The U.S.S. Enterprise NCC-1701 coin's reverse is representative of the United Federation of Planets' logo and portrays a colour image of the U.S.S. Enterprise NCC-1701 flying through space as it appeared in the original Star Trek television series. The design includes the inscription STAR TREK THE ORIGINAL SERIES and U.S.S. ENTERPRISE NCC-1701," according to the Perth Mint.

Both coins feature the Rank-Broadley effigy of Queen Elizabeth II on their obverse along with the year 2015 and their monetary denomination.

The coins are issued as having legal tender status in Tuvalu. The Perth Mint will issue no more than 5,000 of the individually packaged coins, and no more than 1,500 of the two-coin sets will be issued.

Star Trek: The Original Series aired from 1966 to 1969 and spawned a number of motion pictures and spinoff programs including Star Trek: The Next Genration and Star Trek: Voyager.

The Perth Mint held a Star Trek coin launch on Jan. 30 at the 2015 World Money Fair in Berlin.