Stacks Bowers to offer 1861 Confederate half dollar in March 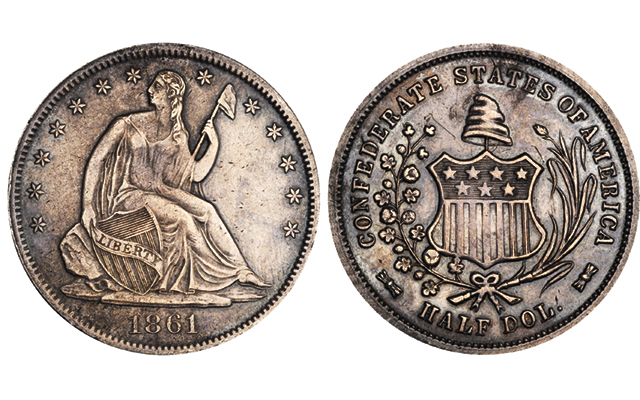 One of only four known Original 1861 Confederate States of America half dollars will cross the auction block in March at the Whitman Baltimore Expo. 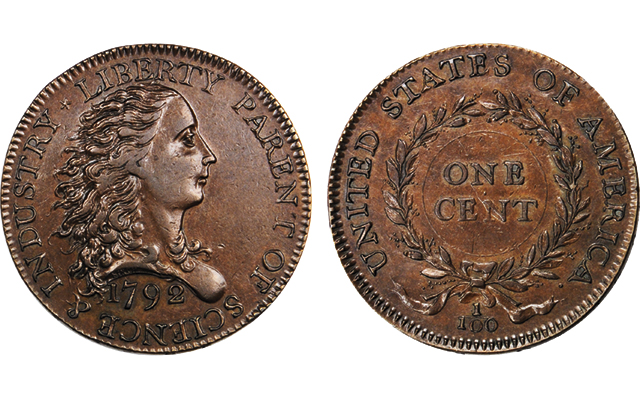 1792 Birch cent to be offered at auction in March was once part of the famed Col. E.H.R. Green Collection.

One of four original 1861 Confederate States of America half dollars, a 1792 Birch cent and one of fewer than 15 known 1792 Silver Center cents will be offered in March by Stack’s Bowers Galleries in conjunction with the Whitman Baltimore Expo.

The extensive collection of Massachusetts silver coinage, Colonial and early federal coinage, and Civil War issues is sold on behalf of and under the name of the Henry P. Kendall Foundation, an American philanthropic enterprise that has been focused on environmental issues for more than 50 years.

None of the coins in the collection is graded and encapsulated by a third-party grading service yet, according to Stack’s Bowers officials.

Mostly assembled from the late 1950s through the 1990s, with a few notable additions within the last 15 years, the Kendall Collection features many coins with famous provenances, including pedigrees to Charles Bushnell, Lorin G. Parmelee, Matthew A. Stickney, John Story Jenks, the Garrett family, and John J. Ford Jr. among others, according to Stack's Bowers.

Many coins in the Kendall Collection have not been offered publicly in a century, if ever, according to Stack’s Bowers officials.

An abiding interest in the history of the American South also inspired a focus on the coinage of the Confederacy for the Kendall Collection.

The 1861 Confederate States of America half dollar, one of just four original examples struck, will be sold publicly for the first time after having been a part of the cabinet since its acquisition from noted dealer Lester Merkin in 1971.

A rare original 1861 Confederate States of America cent will also be offered, along with circa 1874 restrikes by John Haseltine. These Confederate rarities are counterbalanced by three examples of the extremely rare Union 1864 Colored Troops Army of the James medal, commissioned by Gen. Benjamin Butler to be awarded to African-American soldiers distinguished by their bravery in the attack on Newmarket Heights.

The Kendall Collection’s many post-Colonial rarities are led by several rare 1792 patterns.

Highlighting the assemblage is a choice 1792 Birch cent acquired privately in 1975 from Stack’s. It is considered the finest example offered since the 1979 Garrett I sale.

The collection's 1792 Silver Center cent, one of fewer than 15 known, showcases a design conceived by Thomas Jefferson and was among the first pieces struck at the Philadelphia Mint.

Examples of the 1792 disme in copper and the 1792 half disme will also be offered.

According to Stack’s Bowers officials, the collection's selection of Massachusetts silver coinage was assembled quietly by a private collector in conjunction with Merkin, assisted by members of the Stack family.

The Kendall Collection now includes more than 120 examples of Massachusetts silver coins, outpacing the F.C.C. Boyd-John J. Ford Jr. Collection to become the most complete such grouping ever formed, according to the auction firm.

Six different NE (New England) shillings — along with the Garrett Collection NE sixpence — make the Kendall Collection complete by die variety among NE pieces, aside from the unique NE threepence held by the Massachusetts Historical Society.

The collection's Willow Tree pieces comprise five of the six known shilling varieties, a superb Willow Tree sixpence, and the only Willow Tree threepence in private hands, according to Stack's Bowers.

More than 50 examples of the Oak Tree type are included, led by the unique Noe-15 Oak Tree sixpence, called a “pattern” by numismatist Sydney P. Noe in Oak Tree Coinage of Massachusetts. A similar number of Pine Tree coins will also be offered, including high grade pieces, extremely rare varieties, and coins with legendary pedigrees, according to Stack’s Bowers.