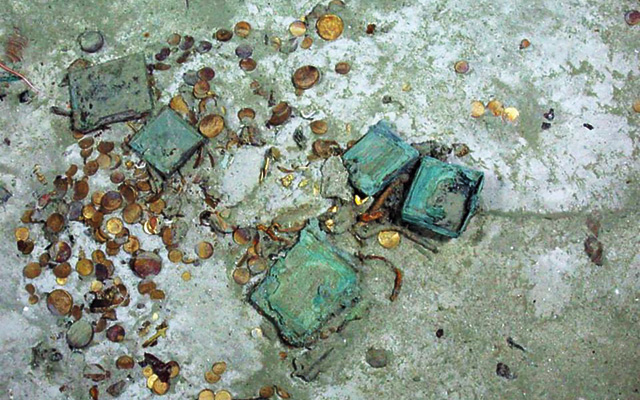 Personal mementos and artifacts from those aboard the ill-fated SS Central America lie strewn among the scattered gold and silver coins on the floor of the Atlantic Ocean.

The wreck site of the ill-fated SS Central America yielded additional gold, silver and other treasures during salvage operations reopened in 2014.

Five months of remotely operated vehicle dives began in mid-April from Odyssey Marine Exploration’s Odyssey Explorer, the first to the wreck site off the coast of South Carolina since recovery operations by another salvor ended in 1991.

The SS Central America sank nearly 200 miles off the coast of South Carolina on Sept. 12, 1857, during a hurricane.

The wreck site was identified in 1987 and recovery operations took place from 1988 through 1991 by the original salvors, Columbus-America Discovery Group.

Millions of dollars in sales and several court cases later, Recovery Limited Partnership has become the court-appointed salvor-in-possession of the shipwreck. And on March 3, 2014, Odyssey Marine Exploration officials announced the firm has been awarded an exclusive contract to return to the wreck site for further excavation.

Just how much treasure remains at the site, and in what form, is yet to be determined, but according to some experts, it could be worth in the tens of millions to hundreds of millions of dollars.

“In my opinion, the treasure is wonderfully complex and complicated, far more so than the previously recovered treasure (1988 – 1991) from the S.S. Central America,” said Bob Evans in a Dec. 2, 2014, email to Coin World. Evans was the chief scientist and historian on the earlier salvage operations and returned in the same capacity for the 2014 recovery efforts.

“As you (and many others) know, the recovered treasure has been published, to the extent that it is known, in the court documents and releases by Odyssey Marine Exploration,” Evans said. “The context of those recoveries await further examination and analysis. All information about it is currently preliminary, since the recovered pieces were examined closely only once, by me, on board the Odyssey Explorer, identified by me, photographed when unique to the 2014 expedition, and packed for delivery to the Marshals and the Substitute Custodian.

“I have not seen it since, nor has anyone else. It is safely and securely stored. The court moves at a deliberate pace, and when some decisions and rulings occur, I will resume the work of examining, discovering, and reporting in much more detail.”

Odyssey Marine plans to return to the wreck site in 2015.