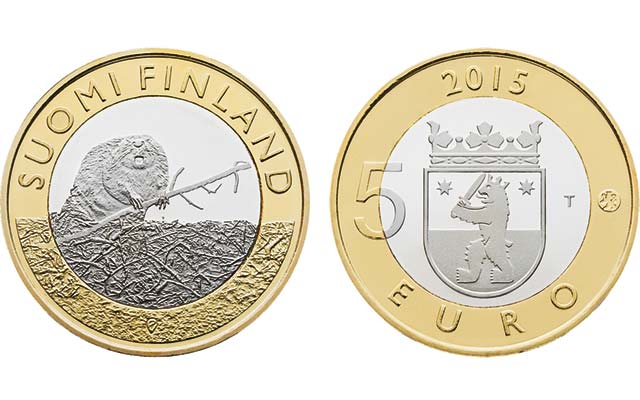 The Mint of Finland’s most recent issue in the Provincial Animals series shows a beaver, the animal for Satakunta.

Sports and animals feature prominently in 2015 collector coins from the Mint of Finland.

According to the Mint of Finland, the 2015 coin program will include design themes celebrating figure skating, gymnastics, basketball and volleyball.

The Mint of Finland said themes for 2015 collector coins were developed after completing a market survey in 2014, so that the Finnish people are able to influence the themes of the collector coins the Mint issues.

The provincial €5 coins are ringed-bimetallic coins, with copper-aluminum-nickel rings surrounding a copper-nickel core.

The newest provincial €5 coin, for Satakunta, shows a beaver on the obverse and the historic coat of arms of Satakunta on the reverse.

A provincial €5 coin for Lapland is scheduled for release in March, and Uusimaa will be honored with a coin in April.

The final provincial coin for 2015, scheduled for release in June, will honor Tavastia.

Four base-metal €5 coins in the series will be released, one per month, from July through October.

The first subject is gymnastics, with basketball and figure skating to follow in succession. The final sport coin will celebrate volleyball.

Another highlight of the 2015 program is the Proof silver €10 coin due for release in May to mark 70 Years of Peace in Europe. That coin is part of the joint Europa star program among several European mints.

The preliminary release schedule for 2015 is posted in its entirety at a special page on the Mint of Finland web site.