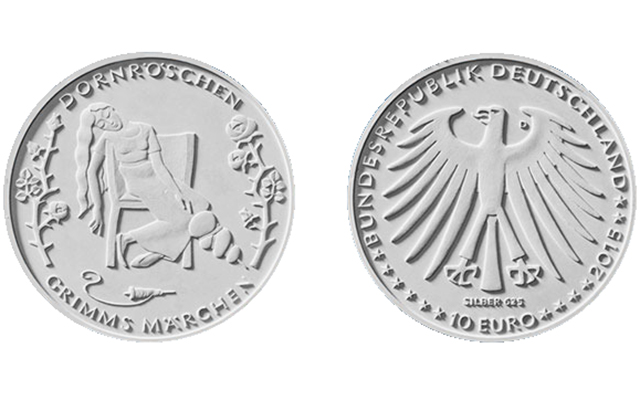 The announcement was made June 4 by the Bundesministerium der Finanzen (the German Federal Ministry of Finance). The coin will be issued in February, according to the announcement.

The Sleeping Beauty coin will be the fourth in a six-year series (that began in 2012) focusing on Grimms' Fairy Tales.

Marianne Dietz designed the coin, which will show Sleeping Beauty asleep in a chair, thorny rose stems on either side of the scene.

The reverse shows a version of the federal eagle, the face value and the D Mint mark of the Bavarian mint in Munich. The 12 stars of the European Union also appear with the year date.

Germany will issue two versions, as it has for all €10 coins since May of 2011, when the price of silver forced Germany’s Mints to raise the price of the €10 coin in silver, as well as issue a copper-nickel version for sale at face value. That move came months after the weight and fineness of the silver coins were reduced.

Germany’s annual commemorative coin programs generally feature five €10 coin designs in a series, with a different design struck at each of the nation’s five mints and issued at the rate of one design per year.

The 2015 Grimms' Fairy Tales coin follows the release of a Hansel and Gretel coin this year, and a Snow White coin in 2013. The coin that began the series in 2012 celebrated the birth bicentennial of the Brothers Grimm.

Future subjects of the program are not yet disclosed.