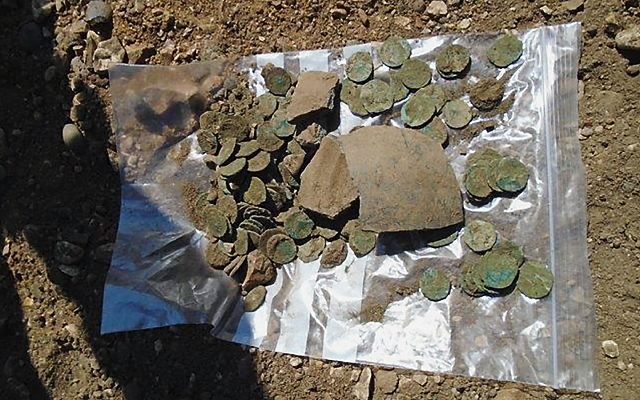 Image courtesy of the Reading Council. 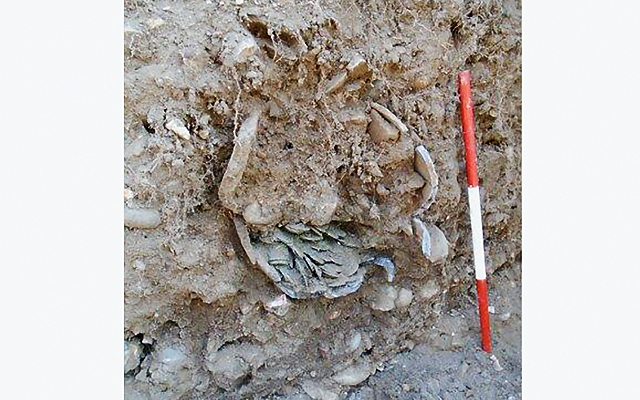 Schools are repositories of learning, but one school in the United Kingdom turned out to have more than knowledge stored away on its property.

A hoard of Roman coins was found April 23, buried in the grounds of The Ridgeway Primary School, in Reading, in Berkshire. The Reading Borough Council announced the find on May 11. The hoard of approximately 300 coins was discovered inside a pottery vessel during an archaeological exploration of the site before the start of the school’s planned expansion and building improvements, according to the announcement.

The coins were sent to a specialist to be cleaned and conserved and to ascertain their precise number, date and denomination. It is thought that the pot of coins was buried by a Roman citizen or farmer for safekeeping, possibly during a time of crisis or threat, the council's report said.

Investigations so far have also shown that probably a small Roman farm or hamlet was on the site of the school, and this was preceded by Late Bronze Age activity around 1000 to 800 B.C.

The pot, coins and any other artifacts found during the archaeological dig at the school belong to the landowner, Reading Borough Council, and fall under the requirements of the Treasure Act 1996, the council's report notes. The report notes that the council hopes the coins will join the collection at Reading Museum to “enhance our understanding of what life was like in the Borough during Roman times.”

In the press release, Paul Gittings, the lead councilor for culture, sport and consumer services, said:

“This is such an exciting find, especially as this ‘buried treasure’ was found in the grounds of a Reading primary school. What a wonderful way to bring history to life for The Ridgeway’s pupils. I am sure that they are as keen as I am to find out more about the coins once they have been assessed by experts.”

The Ridgeway Primary School’s head teacher, Madeleine Cosgrove, said in the press release, “Both pupils and staff are very excited about this discovery and look forward to the story unfolding so that it can be preserved as part of the heritage of The Ridgeway School.”

Under the 1996 Treasure Act, anyone who finds a group of coins buried together, or any artifact that is suspected to be 300 or more years old and has a 10 percent gold or silver content, has a legal obligation to declare it to the local coroner within 14 days.

If the coins are declared treasure, the Treasure Valuation Committee would establish the coins’ full market value. The local museum, which has expressed an interest in acquiring the coins, would then have four months to raise the money to buy the coins.

The finders and the owners of the land would then share the value of the treasure.

The Portable Antiquities Scheme is a scheme to record archaeological objects found by the public.

All such finds are recorded at the website, and detailed information about Roman coin hoard contents is entered into a database operated by Oxford University.