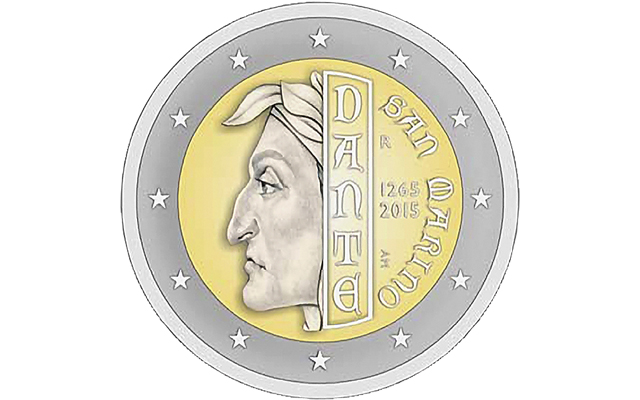 San Marino has unveiled the design for a 2015 circulating commemorative €2 coin marking the 750th anniversary of the birth of Dante Alighieri.

The famous poet Durante di Alighiero degli Alighieri, known as Dante, was born in Florence between May 22 and June 13, 1265.

He is the subject of San Marino’s first commemorative €2 coin for 2015, scheduled for release April 8.

The obverse of the coin designed by Annalisa Masini shows a portrait of Dante, taken from a fresco by Botticelli. The lettering style used in identifying the nation and the coin's subject was inspired by lettering in the first copies of the Divina Commedia (Dante's Divine Comedy).

A mintage of 100,000 Uncirculated pieces will be available in special holders, on sale for €15.

For more information about the coin, or to order, visit the website of San Marino’s Azienda Autonoma di Stato Filatelica e Numismatica.