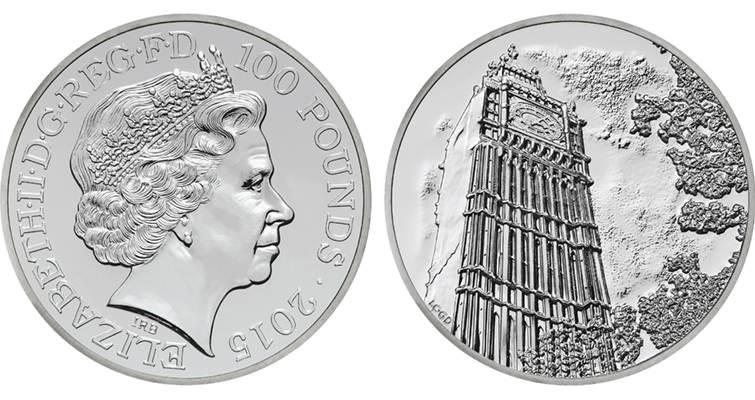 The Royal Mint's first silver £100 coin in a £100-for-£100 coin program sold out its 50,000-coin mintage within two weeks of issue. The coin showcases the tower in London housing the bell known as Big Ben.

Two weeks after it went on sale, the Royal Mint has sold out of Britain’s first ever £100-for-£100 commemorative coin.

The Royal Mint confirmed Jan. 12 that the coin, which features an image of London’s landmark clock tower housing Parliament’s mighty Big Ben bell, is sold out. The announcement came one week after the Royal Mint imposed ordering limits of 10 coins per household and pushed delivery back to mid-February at the earliest. Those moves were just one week after the Dec. 29 launch of the coin.

Coin World asked the Royal Mint Jan. 5 for an update about when the order limits went into affect, but officials did not respond further before this Jan. 12 announcement.

On Jan. 5, a spokesperson had told Coin World: “We haven’t yet had official confirmation, but I know it is a very close run thing, even if it isn’t yet sold. This one was an extremely popular item – a bit of a moving target in terms of sales. I will update you as soon as I get official news.”

SEE EARLIER STORY ABOUT THIS COIN

The nation’s first £100-for-£100 silver coin features the Elizabeth Tower — one of Britain’s best-known landmarks — on the reverse, which was designed by Royal Mint engravers Laura Clancy and Glyn Davies.

This sellout follows the same success as the Royal Mint's first £20-for-£20 coin, issued in October 2013 in honor of the birth of Prince George of Cambridge.

Clancy is also the designer of the Royal Mint's 2014 Remembrance Proof silver £5 coin, which sold out in November.

Director of Commemorative Coin and Medals, Shane Bissett said, in a press release: “The sound of Big Ben chiming in the Elizabeth Tower is one which is synonymous with Britain for millions of British citizens and tourists alike, particularly on New Year’s Eve. We thought that this British icon was a fitting choice for the nation’s first £100 for £100 coin, and that the New Year would be a fitting time to reveal it. We are pleased to confirm that we have now sold out of this coin, and have been thrilled with the fantastic feedback and unprecedented interest from our customers and the UK general public.”