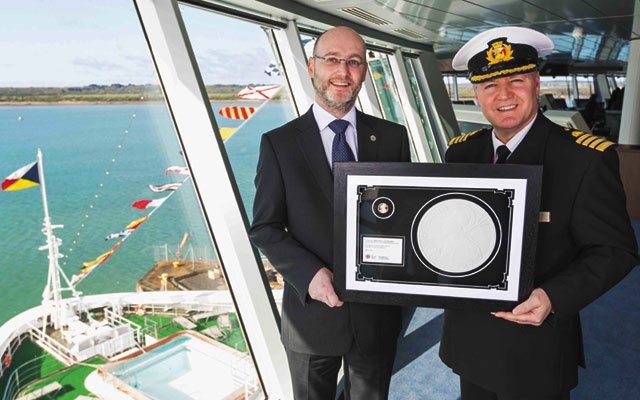 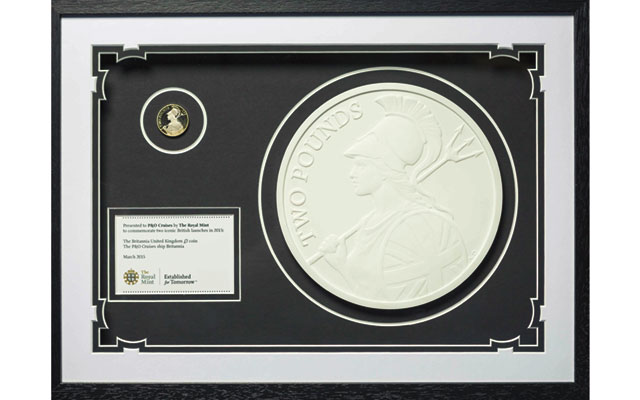 The Royal Mint presented this framed plaster and 2015 Britannia £2 coin aboard a cruise ship named Britannia.

The Royal Mint and P&O Cruises have commemorated the launch of two iconic ‘Britannias’ in 2015 – a new United Kingdom £2 coin and the cruise ship Britannia.

In the same week that P&O Cruises launched its new cruise ship Britannia, the Royal Mint revealed that the iconic figure of Britannia will return to rule over the United Kingdom’s circulating coins.

To commemorate these two momentous occasions, Shane Bissett, the Royal Mint’s Director of Commemorative Coin and Medals, presented Captain Paul Brown of P&O Cruises with a special edition of the £2 Britannia to display on board the cruise ship Britannia.

The new depiction of Britannia will be struck on the United Kingdom’s definitive circulating £2 and begin to enter circulation at some stage during 2015.

Speaking at the launch of the new £2 Britannia, the Prime Minister David Cameron said: “It is great to see Britannia’s welcome return to our currency. Making her first appearance on our coins in the 17th Century, Britannia is an enduring symbol of our national identity, ideal to help reinforce the strong sense of shared purpose and history for modern Britons.”

Shane Bissett, The Royal Mint’s Director of Commemorative Coin and Medals, said:  “The instantly recognisable figure of Britannia has a long, enduring history which has evolved and changed in keeping with the nation which she represents. She has come to stand as a symbol of renewed optimism for our country, and has a rightful place on the currency of the United Kingdom.

“The birth of two such iconic Britannias almost simultaneously is an important event which The Royal Mint and P&O Cruises wanted to mark in an appropriate manner. It gives me great pleasure to visit our coin’s namesake, and it is an honour to have the opportunity to commemorate the launch of the cruise ship Britannia.”

Captain Paul Brown, added, “It is a great honour to receive this special commemorative coin and very fitting that we are on board Britannia, which is 'the nation’s ship.' The name Britannia has great historical resonance with P&O Cruises long and famous heritage and, most importantly, both the ship and new £2 coin pay homage to our past and celebrate the forward-looking Britain of today and the future.”

For further information about the Britannia £2 coin visit the Royal Mint website.