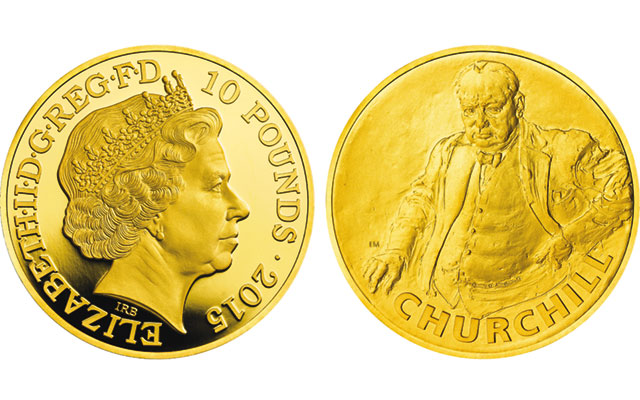 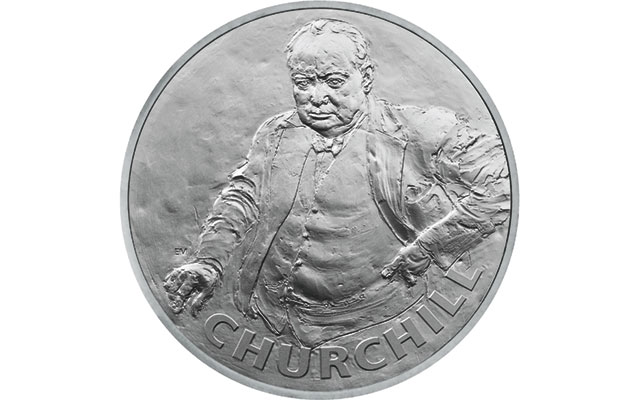 The 2015 design honoring Sir Winston Churchill on a silver £20 coin is now available in 5-ounce and kilogram silver and gold versions.

The Royal Mint announced Feb. 8 that it would be issuing four large coins depicting Etienne Millner’s design of Churchill on the reverse. Millner created the design for a silver £20 coin that is being sold for face value and was released in mid-January. Millner took his inspiration from a celebrated photograph of Churchill captured by Yousuf Karsh in 1941.

The coins bear the current Ian Rank-Broadley effigy of Queen Elizabeth II on the obverse.

Millner is a leading figurative sculptor, creating works in clay and plaster that are later cast in bronze.

The Churchill coins are his first commission for the Royal Mint and it provided an enjoyable challenge, according to a press release from the Royal Mint.

“My work is normally very free, and while I aim to achieve a good likeness to the subject my portraits are not entirely literal. Working within the confines of a coin’s size and relief took some practice and for Churchill I could only work with photographs instead of a sitting,” he is quoted in the press release.

“I turned to the famous portrait taken by Yousuf Karsh in 1941,” he continued, adding, “However, the picture is dark and I had to turn to other lighter prints for some of the fine details. Working with the coin’s relief forced me to simplify and emphasise the strongest features — the powerful jaw, the distinctive thin lips rising to one side — all helping to achieve the likeness of such a familiar figure.”

The silver coin has a mintage limit of 170 pieces, with 120 available individually at present. The gold coin mintage is capped at 15 pieces, all offered individually.