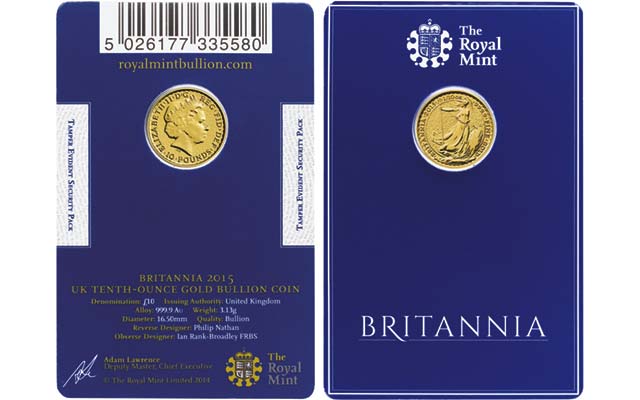 The Royal Mint in late April is issuing fractional sizes of its gold Britannia bullion coins. The smallest size is the tenth-ounce £10 coin, seen here in new plastic packaging. 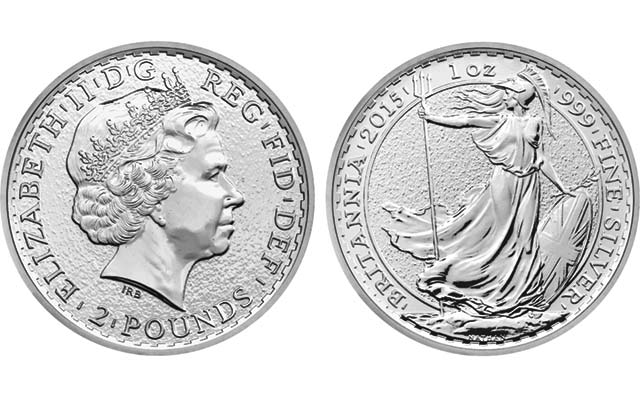 The Royal Mint’s 2015-dated Britannia fractional bullion coins are set to become available at the end of April.

The new smaller size bullion coins were announced last fall. They are being issued to complement the traditional Britannia bullion range and offer investors more-affordable options.

The move follows the Royal Mint’s launch of a bullion trading website, and the addition of Royal Mint Refinery gold and silver bars to the products available.

The launch of the smaller fractional sizes — in half, quarter and tenth-ounce versions — also marks the debut of new secure credit-card-sized packaging.

Lisa Elward, The Royal Mint’s Head of Bullion Sales said, “[These moves] have made bullion coins even more accessible for those looking to access the precious metals market. The [Value-added-tax]-free status of gold coins in the United Kingdom and the fact that all UK coins are capital gains tax free for UK residents continues to appeal.”

The coins are available to purchase in a range of packaging styles and quantities, depending on size and metal: individually in the new credit-card-sized, sealed, protective, single packaging; in protective tubes of 10, 20 or 25 coins; or in sheets of 20 capsules.

All of the 2015 coins feature the standard Philip Nathan design of Britannia on the reverse, with the Ian Rank-Broadley effigy of Queen Elizabeth II on the obverse.

Britannia bullion coins do not have mintage limits, but the amount sold during the sales period becomes each coin's "mintage." The sales period is not fully defined as yet.

Britannia, the female representation of Britain, has a long history on British coinage. She is the embodiment of the nation she has represented for almost 2,000 years, ever since the Romans invaded the isles and claimed them as the province of Britannia. She first appeared on the Roman coins of Emperor Hadrian circa A.D. 119 and was revived for the coinage of Charles II in 1672.

For full details of the Royal Mint bullion program, visit the Mint's website.