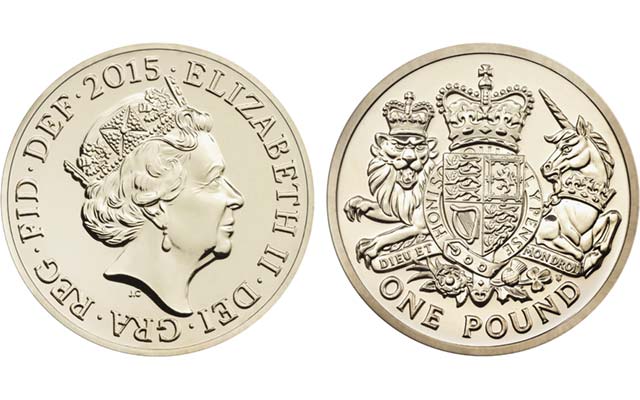 The Royal Mint late in 2015 will release a new £1 coin into circulation, featuring a contemporary interpretation of the Royal Arms. 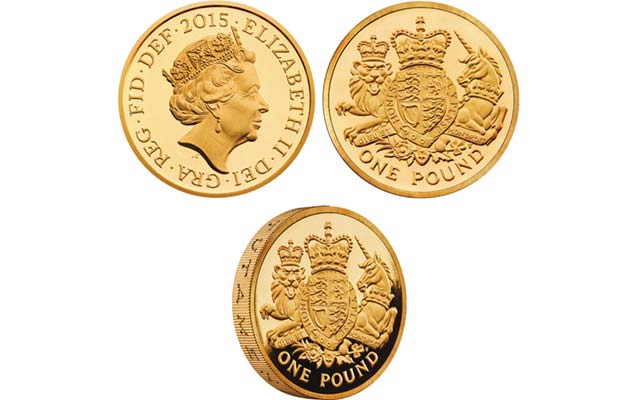 Collector versions of the 2015 £1 coin featuring a contemporary interpretation of the Royal Arms include this Proof .9167 fine gold version.

The Royal Mint has issued a new £1 coin for 2015 portraying Timothy Noad’s contemporary reworking of the Royal Arms, in a heraldic celebration of the United Kingdom.

The Royal Arms has featured on the coinage of the United Kingdom for centuries, and is an emblem that is trusted and respected all over the world. Once displayed on the medieval battlefield on shields, banners and dress, the Royal Coat of Arms has always been — and remains to this day — a national symbol.

Signifying authority, approval and allegiance, it identifies the queen in her capacity as head of state and is a well-known motif displayed in government buildings, in churches and on official documents.

The public can expect to see the new design in their change beginning in November.

It will be the first new commemorative design on the current £1 circulating coin to feature the fifth portrait of Queen Elizabeth by the Royal Mint designer Jody Clark.

RELATED: Queen Elizabeth II and the evolution of her coin portraits

It is also significant in that it will be one of the last designs to appear on the current £1 coin, as a new, highly secure £1 coin will be released into circulation in 2017.

The Royal Arms is an ornate emblem with a quartered shield at its centre, supported on the one side by a crowned English lion and on the other a Scottish unicorn. Just below sit the rose, thistle and shamrock representing England, Scotland and Ireland respectively. The older union with Wales is not usually symbolized here, although more modern designs add the leek to restore the balance of the home nations.

Beneath the lion and unicorn is the motto of English monarchs – Dieu et mon droit (which translates to “God and my right”), while around the shield the insignia of the Order of the Garter display the Order’s own motto – ‘Honi soit qui mal y pense’ (shame upon him who thinks evil upon it).

The artist has a background in calligraphy, heraldry and illumination and specializes in working with age-old traditions and materials. As an Herald Painter (heraldic artist) at Her Majesty’s College of Arms, and Scribe and Illuminator to Her Majesty’s Crown Office at the House of Lords, Noad receives multiple commissions each year which incorporate the Royal Arms device in its traditional form.

This design is especially important and meaningful to the artist he had always harbored an ambition to create his own interpretation of the Royal Arms.

Seizing his chance, he looked to the Hanoverian and Victorian periods for inspiration, and it was on a visit to the Royal Maritime Museum in Greenwich that he spotted an unusual variant on the Royal Coat of Arms on the side of a naval drum, dating from Nelson’s time, giving the supporters (the lion and unicorn) much more prominence than usual – a design he thought would work well on something as small as a coin.

All of the coins measure 22.5 millimeters in diameter, the same size as the version placed into circulation.

The BU nickel-brass £1 coin weighs 9.5 grams and has an unlimited mintage.

It comes presented in a colorful folder for £10 each.