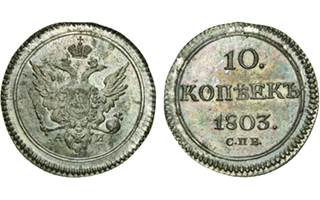 A group of rare 19th century Russian silver coins discovered among a large group of mostly worn common coins sent to Morton & Eden in London for valuation will be sold at auction June 10, 2014.

Contained in old, small, paper envelopes, amongst hundreds of others holding coins of minimal value, were 39 minor Russian silver coins of the early 19th century in what is described as amazing condition. The coins had been sent to Morton & Eden for sale by a descendant of an eastern European family whose members had emigrated many years ago to the United States, according to the auction firm.

The coins consist of silver 20-kopek pieces, 10-kopek pieces and 5-kopek pieces, dated from 1802 to 1825, all struck during the reign of Tsar Alexander I. Each is different, leading to speculation that they originally belonged to a set of coins, of which records have since been lost.

The collection will be auctioned by Morton & Eden in Sotheby’s sales rooms on June 10.