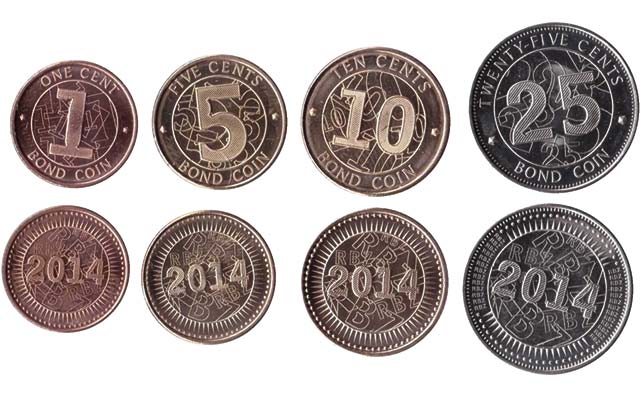 Zimbabwe’s bond coins, denominated 1-, 5-, 10-, and 25-cents U.S., have begun appearing for sale at eBay in this image from eBay seller alexandercoins.

In early March, dealers began listing the coins at eBay. The 1-, 5-, 10-, and 25-cent coins are necessary in the multi-currency system Zimbabwe adopted in 2009 after years of rampant inflation. In March 2015, the bank was to begin circulating 50-cent bond coins to meet rising demand.

Zimbabwe now uses U.S. dollars, South African rand, and European Union euros, among other currencies. However, a lack of small change forced customers to accept small items like gum as replecements for coins in change.

There are an estimated $2.5 million U.S. worth of the coins now in circulation, according to media reports. The coins are backed by a $50 million bond held by the Reserve Bank of Zimbabwe (hence the name of the series).

The coins are denominated in U.S. dollar equivalents.

According to a statement from the Banker’s Association of Zimbabwe, “The lack of coins in the economy has contributed to the overpricing of commodities and forced consumers to overspend as a result of the lack of change.”

Users were initially skeptical of the coins, believing they heralded a return to the failed Zimbabwean dollar of the 2000s. That, and a belief that others would not accept them, helped breed resistance to the new coins after the were initially launched. However, they have since seen broader acceptance.

Indivudual sets are currently retailing for about $10 to $15 per set on eBay.