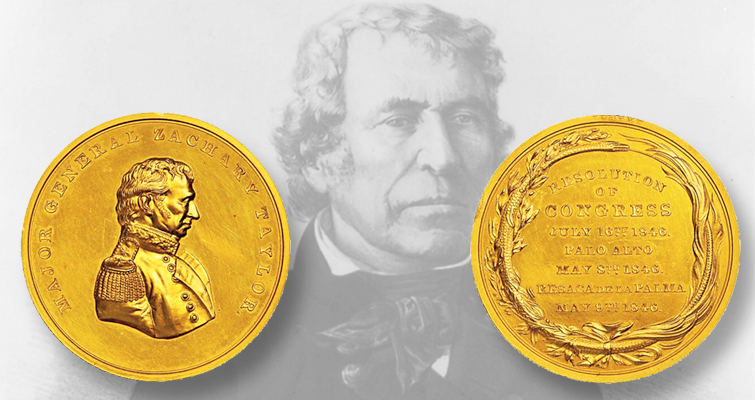 Several notable gold medals are crossing the auction block at Stack’s Bowers Galleries’ Aug. 9 evening session at the American Numismatic Association World’s Fair of Money in Anaheim, Calif., including the first of three such medals awarded to Zachary Taylor. 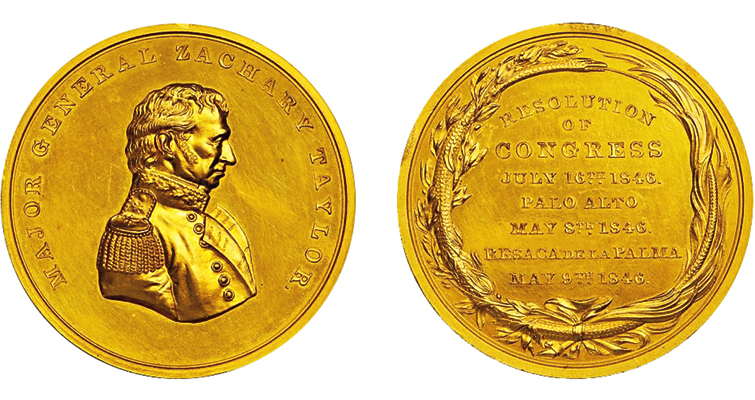 A congressional gold medal dated 1846 and awarded to Gen. Zachary Taylor for defeating the Mexican Army at the battles of Palo Alto and Resaca de la Palma will be a top lot at Stack’s Bowers Galleries’ ANA auction. 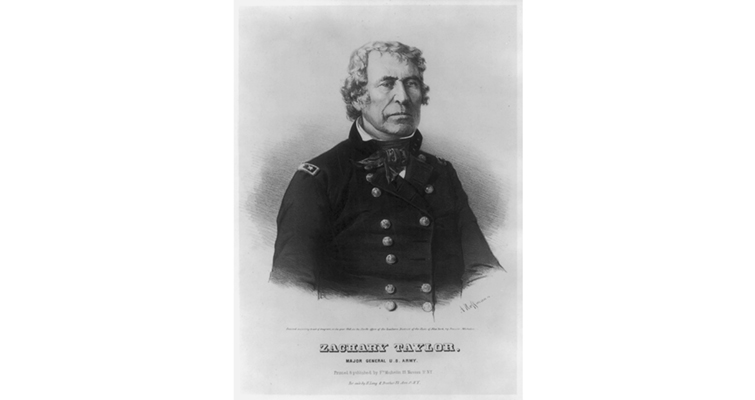 Zachary Taylor depicted in a lithograph by Francis Michelin from around 1848. 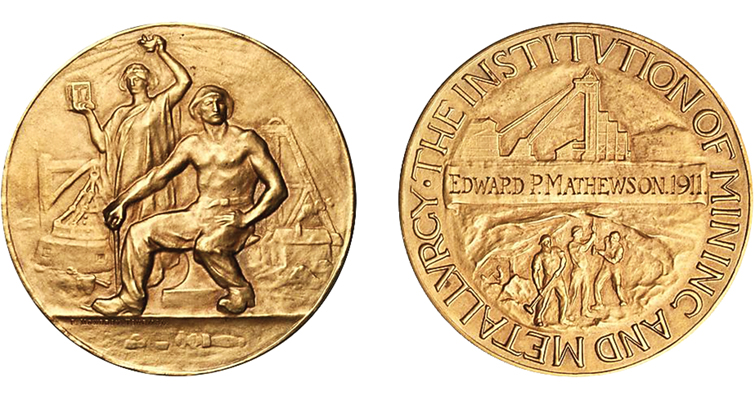 An Institution of Mining and Metallurgy award medal given to Mathewson by that British research group in 1911 will also be offered at the 2016 ANA sale. 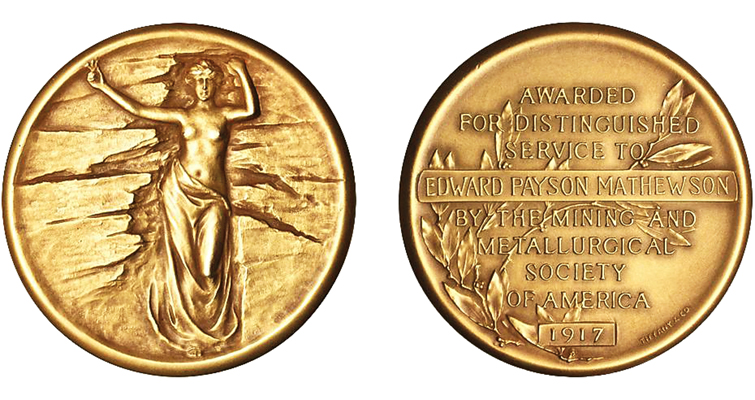 A gold medal created by Tiffany and Company and awarded in 1917 to Edward Payson Mathewson by the Mining and Metallurgical Society of America is reflective of contemporary coin designs.

Perhaps the most visually impressive and historically significant is a congressional gold medal awarded to Gen. Zachary Taylor (1784 to 1850) by a unanimous vote of Congress on July 16, 1846, for defeating the Mexican army at Brownsville, Texas, during the 1846 battles of Palo Alto and Resaca de la Palma. The offering represents the first time that it has been offered at auction.

The medal measures 64.7 millimeters in diameter and was the first congressional gold medal voted by Congress for a military action after the War of 1812.

The lot description states: “Mint Director Robert Maskell Patterson communicated with William L. Marcy, the Secretary of War, in December 1846, dictating the designs and size of the medal to be struck. Patterson calculated the expense of ‘8 oz fine gold,’ as close to pure as technology then allowed, at $165.36. The dies would cost an addition $600, plus $5 for an appropriate case and some other minor expenses.”

The obverse portrait is by John Gadsby Chapman, and the reverse design and its inscription was suggested by Patterson.

Gilkes adds, “On the secondary market or at auction, collectors may encounter examples in silver or bronze composition of each of the three medals.”

Taylor would go on to become the 12th president of the United States. He would die on July 9, 1850, after suffering briefly from an intestinal ailment. Millard Fillmore, his vice president, would complete his term.

Stack’s offered the 1848 gold medal given to Taylor for actions at the battle of Buena Vista in the Mexican War for $460,000 at a Nov. 8, 2006, auction. That 89.5-millimeter medal was made from the first deposit at the Mint from the California Gold Rush and its price represented a record for an American medal at auction that stands today.

The description includes a survey of the location of 20 surviving pre-1900 congressional gold medals, of which few remain in private hands.

Two 19th century congressional gold medals have appeared at auction recently, with the description reporting that a gold medal awarded to William Henry Harrison for the Battle of the Thames in 1813 sold privately from Harrison’s descendents in 2015 for a price in excess of $200,000. A gold medal awarded to Alexander Macomb for the Battle of Plattsburgh, 1814, sold in a 2015 Swiss auction for approximately $225,000.

Other existing medals are located in many prominent collections including the Smithsonian Institution, the New-York Historical Society, Boston Public Library, National Museum of the United States Army, American Numismatic Society, United States Naval Academy, and others.

Another impressive medal is an 18-karat gold 1917 Distinguished Service Medal by the Mining and Metallurgical Society of America. The 50.6-millimeter medal was struck by jeweler Tiffany & Company and awarded to Edward Payson Mathewson in 1917, in recognition of his work in the “Art of non-ferrous metallurgy.” The medal is housed in the original green leather case of issue.

The description notes, “Beautifully styled with a fine matte finish that was popular on medallic art in this period,” it has a design that is reminiscent of the Standing Liberty, Bare Breast quarter dollars of 1916 and 1917.

The award has been presented just 35 times between 1914 and 2015 and is presented to recognize “conspicuous professional or public service for the advancement of the science of Mining and Metallurgy, or of Economic Geology; for the betterment of the conditions under which these industries are carried on, for the protection of mine investors, and especially for the better protection of the health and safety of workmen in the mines and metallurgical establishments.”

The society considers the gold medal to be its highest honor it can bestow on individuals providing exemplary service to the betterment of the mineral industry.

The next lot is a 51.3-millimeter 22.5-karat gold Institution of Mining and Metallurgy award medal given to Mathewson by that British research institution in 1911 “in recognition of his eminent services in the advancement of metallurgy generally and especially in regard to copper.”

Mathewson’s papers reflecting his career from 1890 to 1936 are held by the American Heritage Center at the University of Wyoming. He was a mining engineer who began his career with the Pueblo Smelting and Refining Co. in Colorado, rising to superintendent in 1889. Mathewson would later work for H. Guggenheim & Sons in Mexico, New Jersey, and Chile. In 1902 he joined the Anaconda Mining Co. and worked in Montana until 1916, became a private consultant in 1918 and began teaching at the University of Arizona in 1926.