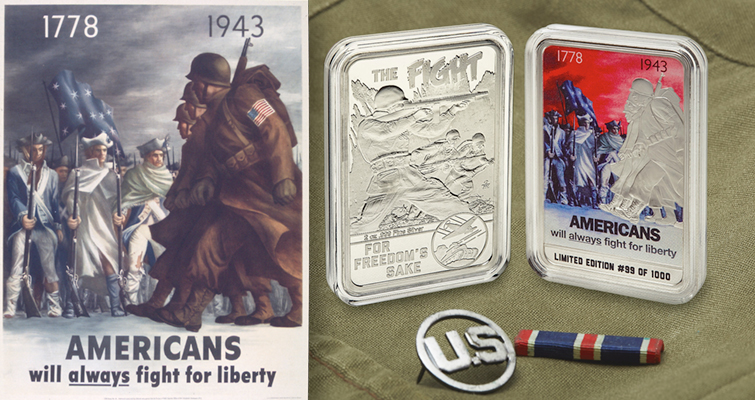 The first silver ingot from a series of four depicting World War II-era posters of America is now available.

Images courtesy of the Osborne Mint.

When America went to war during World War II, American artists went to work to mobilize the homefront to work for victory.

Four new silver ingots from the Osborne Mint (the oldest privately owned mint in the United States) celebrate some of the propaganda messages that proliferated on posters distributed around the nation in war.

The set of four colorful 2-ounce .999 fine silver ingots, dubbed “The Fight For Freedom’s Sake,” is being rolled out beginning in late November.

More than 200,000 different poster designs were created by the Office of War Information.

The four posters selected for The Fight For Freedom’s Sake collection serve to represent the overall look and feel of the propaganda posters campaign.

The ingots are being released one per quarter, so the whole series will be available across nine months.

The first design is “Americans Will Always Fight for Liberty.”

This poster possesses a positive message in support of the war effort for those on the homefront by signifying the correlation of American patriots of 1778 to the troops of 1943.

The addition of color crafts a 3D poster effect recognizing the bold hues and stark messaging of the original posters, according to Osborne.

This ingot program is the first time Osborne Mint has deviated from traditional rounds to produce an ingot of this weight and these proportions in silver.

Each ingot measures 2.5 inches tall and 1.7 inches wide, providing a much larger canvas than traditional round collectibles produced by Osborne Mint.

Each ingot mintage is limited to 2,500 pieces. The ingots are individually numbered, packaged in custom capsules, and accompanied by a certificate of authenticity.

The Fight For Freedom’s Sake collection can be purchased at several precious metals dealers. 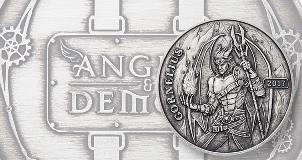 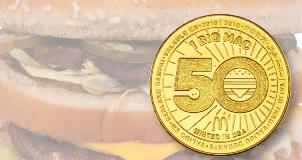 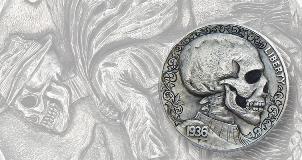