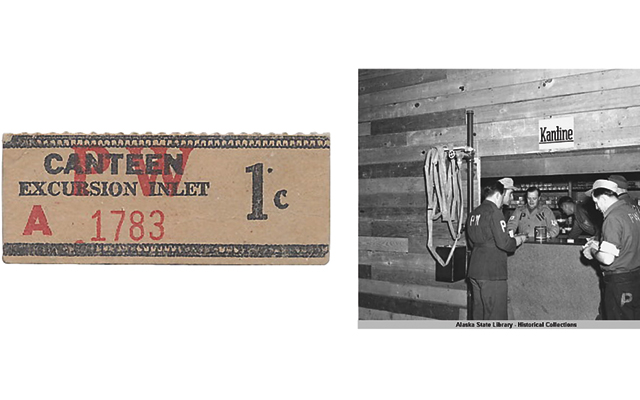 The only known example of a chit, left, from the World War II prisoner of war camp in Excursion Inlet in Alaska was for use in the camp's "kantine," shown at right.

A 1-cent canteen chit used in 1945 by German prisoners of work at a POW camp in Excursion Inlet, Alaska, is the only known example reported extant.

The chit, reported to have surfaced in 2013, is discussed in the most recent issue of Alaskan Token Collector & Polar Numismatist, published by Alaska Rare Coins.

The chit is illustrated in full color on David Frank's Worldandmilitarynotes.com website.

Located in southeastern Alaska near Juneau, Excursion Inlet served as the site of a camp for some 700 German prisoners of war brought there in June 1945 to dismantle the Alaska Barge Terminal. The POW camp was closed in November 1945.

The chits, according to author Lance K. Campbell in Prisoner of War and Concentration Camp Money of the 20th Century, were usually issued in booklets having strips of chits in various denominations. The Excursion Inlet chit would have been for use by the German POWs in the camp canteen, or "kantine."

During World War II, Excursion Inlet was used as a prisoner-of-war camp, and a strategic base for the Aleutian Islands Campaign.