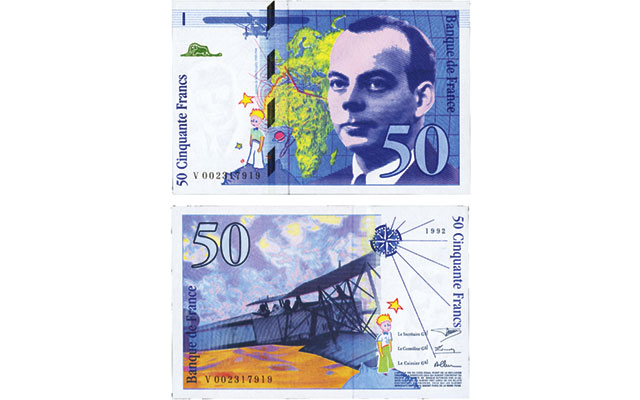 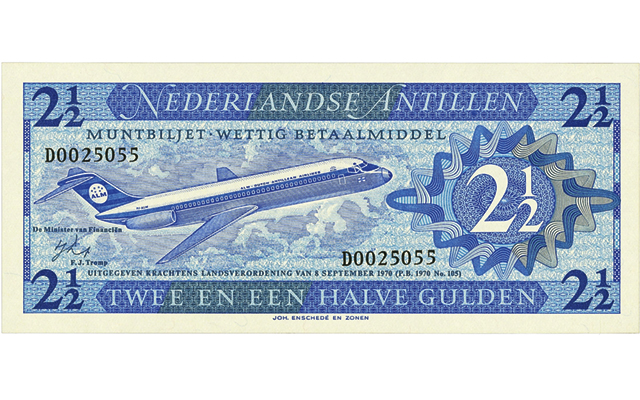 The face of the 1970 Netherlands Antilles 21/2 gulden notes depict a large jetliner, possibly flying above the many islands of this former Caribbean country.

Editor's note: The following is the second of a three-part Coin World series about collecting paper money featuring airports, airplanes and other forms of air travel, prepared by Michele Orzano for the December 2014 monthly edition of Coin World.

This island nation issued $5 notes in 1995 with the back design showing a “bird’s eye” view of the Nadi International Airport. It’s the main international airport for the South Pacific island of Fiji.

The original airfields were built in 1939 and 1940 while Fiji was a colony of Great Britain. In 1941 the U.S. Army Air Force used the airfields when the nations in the Pacific Ocean became involved in World War II.

The romance of good story might have been the impetus of the design for the 1993 French 50-franc notes.

The notes depict a portrait of author Antoine de Saint-Exupery who wrote The Little Prince. The back design shows Saint-Exupery’s Breguet XIV biplane.

Drafted into the French air force after World War I, Saint-Exupery told of life as a mail pilot in a series of books. He was probably shot down, though officially listed as lost, on a reconnaissance mission over the Mediterranean, flying for the Free French in 1940.

An error variety is known for this note. About one-fifth of the notes have an accent above the “E” in “Exupery.” None is needed there. The error was caught and fixed, though not before some error versions were released into circulation.

The back design for Hong Kong’s $500 notes issued in 2003 shows an airborne view of the Hong Kong Airport, along with a vignette of the control tower and the tail of a jetliner.

The back of the $500 notes issued in 2005 shows the Hong Kong Airport terminal and a portion of the runway.

A vignette of the Jakarta Soekarno-Hatta International Airport occupies much of the back of the 1993 50,000-rupiah notes of Indonesia.

The airport, located on the island of Java, is named after the first president of Indonesia, Soekarno. His name is often also spelled as Sukarno.

Like many Javanese, he had only one name. The second part of the hyphenated airport name is the last name of Indonesia’s first vice president, Mohammad Hatta.

The 1980 Kenya 50-shilling notes depict an airplane flying over Jomo Kenyatta Airport on the back of the note.

The airport is located just outside of Nairobi and is the ninth busiest airport in Africa. It serves Africa, Europe, Asia and the Middle East.

It was named for the first Kenyan prime minister and president, Mzee Jomo Kenyatta, after his death in 1978.

They are regarded as national heroes of Lithuania for their 1933 long-distance flight from New York to Europe. They intended to land at Vilnius, but they crashed off course over Germany.

The back of the note depicts their plane.

The 1997 Malaysia 10-ringgit notes depict a modern passenger train, a passenger jet airliner and a freighter ship on the back. Another example of “sky” travel can be found on the country’s 1996 2-ringgit notes, which show a modern tower, possibly an airport control tower, and a communications satellite.

The face of 1970 Netherlands Antilles 2½-gulden notes depicts a large jetliner, possibly flying above the many islands of this former Caribbean country. If you look closely you can read the name of the former ALM Antillean Airlines on the side of the plane. The company was in business from 1964 to 2001.

During the 17th century the Dutch colonized a series of islands in the southern Caribbean Sea and united them as the Netherlands Antilles in 1954.

In 1986 Aruba became a special state in the Kingdom of Netherlands. Then in 2010, Netherlands dissolved the Netherlands Antilles.