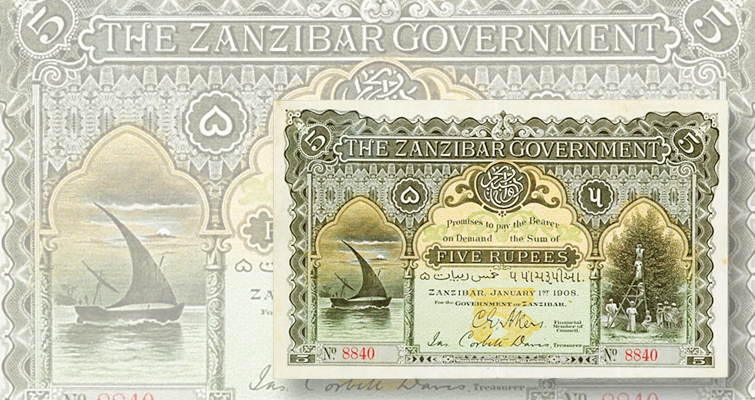 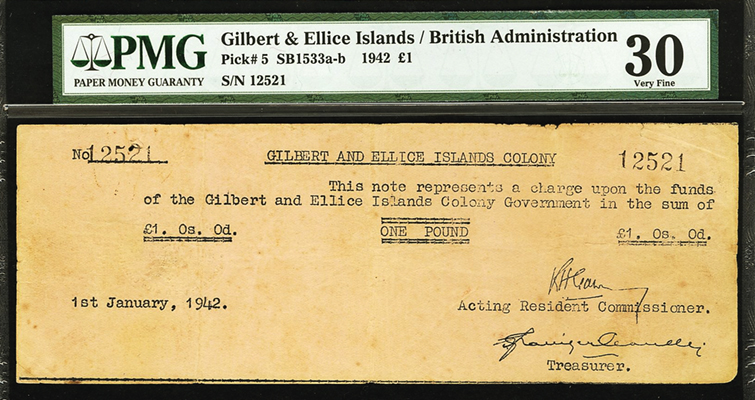 The £1 note note shown above are from a rare complete Gilbert and Ellice Islands type set that also included 1- and 2-shilling notes. The set realized $56,400, far ahead of all the other British Commonwealth lots in the Heritage FUN world currency auction. 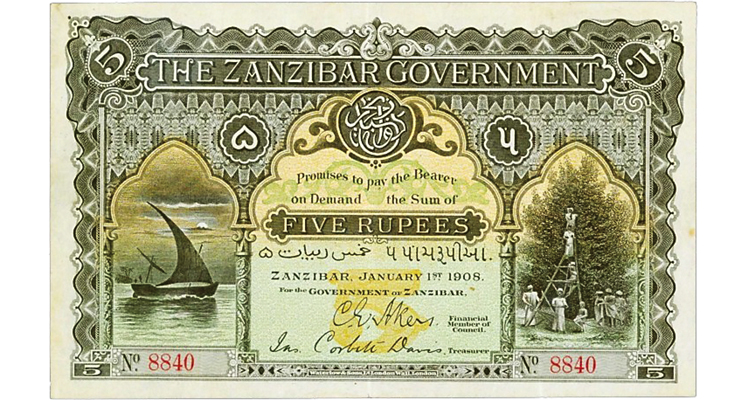 The popularity of British Commonwealth bank notes was on full display at the Jan. 5 Heritage world currency auction in Fort Lauderdale, Fla., as 16 of the 30 highest prices came from Commonwealth members.

Far ahead of all the others at $56,400 was a rare complete Gilbert and Ellice Islands type set of 1-, 2-, and 10-shilling notes and a £1 issue. Those western Pacific islands, now known as Kiribati and Tuvalu, were a British protectorate or colony from 1892 until they were invaded by Japan in 1942. Very few survive of any of the four notes. They are dated 1ST JANUARY, 1942, and were issued just before the invasion. Heritage says the notes are typewritten, although others say they are mimeographed. They are on regular paper and have lightly embossed seals. Paper Money Guaranty graded the 2- and 10-shilling notes Very Fine 25 and the others VF-30.

A PMG Gem Uncirculated 67 PPQ €500 note of the European Union from 2002 must have turned some heads when the soon-to-be discontinued denomination sold to an Internet bidder for $5,875. Part of the reason is that it is a rare Irish issue, as shown by the “T” serial number prefix. Only 150,000 were printed.

A piece of paper money selling for more than $100,000 does not occur too often, but in the area of United Sates currency, is not unexpected. It’s a whole other story when that threshold is passed by a world bank note, such as the next-to-last lot in the Stack’s Bowers Galleries Jan. 12 New York sale.

The very rare item is said to be the “finest certified uncancelled issued Zanzibar note.” It is the lowest denomination in the nation’s first series of five denominations. The others are in 10-, 20-, 50-, and 100-rupee denominations, all of which are also very rare. It is a uniface design that shows on its left panel a dhow, one of the one- or two-masted vessels with lateen sails common in the area of the Indian Ocean and Red Sea, with the sun on the horizon above it. The right panel depicts farmers at work in the fruit harvest. Decorative lathework appears on three of the four sides and counters bear the numeral 5 in each corner.

A book of 36 Iranian specimens once belonging to a close adviser of the shah who fled to the United States in 1979 sold for $30,550.