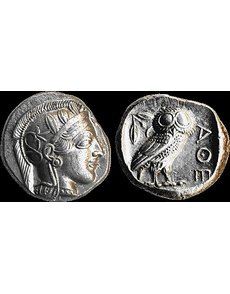 Coins have been around for thousands of years, but will they still be used a generation from now? Bowers expects that the numismatic hobby will be as dynamic as ever. Shown is an Athenian tetradrachm from circa 449 to 409 B.C.

“The only thing that is constant is change,” it has been said. April 2012 bears little resemblance to April 1952. Back then, there was no Internet, radios had vacuum tubes, television sets were black and white and were useful only in large cities, the threat of polio closed swimming pools in the summer, Ronald Reagan was a movie actor, new bowling alleys were being built everywhere, nothing artificial had been launched into space, rock and roll music had yet to come on the scene, and the world’s most popular periodical was Readers Digest.

Proof sets cost $2.10 each from the Philadelphia Mint and came in square cardboard boxes. If you wanted to buy the latest commemorative coins, a set of three (one from each Mint) could be bought for $10 from an official distributor such as Stack’s.

As a young teenager in April 1952, I enjoyed collecting rocks and minerals and would not discover coins until that summer.

Today, things are vastly different and are still changing. In numismatics, what will happen to our dear cent, minted for every year (except 1815) since 1793? Will coins themselves, around since about 700 B.C., disappear? Will printed versions of Coin World, A Guide Book of United States Coins and Penny Whimsy become historical curiosities, replaced by applications for the iPad and similar technology (which itself will likely be obsolete in a few years)?

A couple years ago, I noticed that I was no longer receiving the gorgeous color catalogs issued by Fontaine’s Auction Gallery in Pittsfield, Mass., seller of art glass lamps, Victorian furniture and the like. I talked with owner John Fontaine and he said that he had gone to Internet only. “The descriptions can be longer and more informative, and instead of showing just one or two pictures of an item we can show 10. Our customers are very enthusiastic.” Will this happen to coin catalogs?

April 6, USA Today ran a feature article stating that a “2010 Kaiser Family Foundation study found that people ages 8 to 18 spent an average of 7½ hours per day on digital media.” Another quoted study said many of the younger generation have no particular interest in the environment and the number visiting national parks has dropped precipitously. Will they go the way of the bowling alley? As numismatists, how are you and I going to handle these transitions?

The hobby was dynamic way back in 1952, and today with all of these changes it is even more so. I expect in the years ahead this will continue, but the media and accessories will be different.