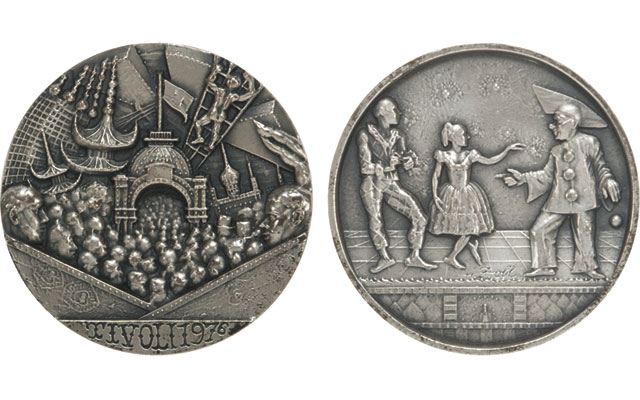 Dance and pantomime are just two of the fine arts presented at the Pantomime Theatre at Tivoli Gardens. This open air theater is depicted on a Danish silver art medal from 1976. 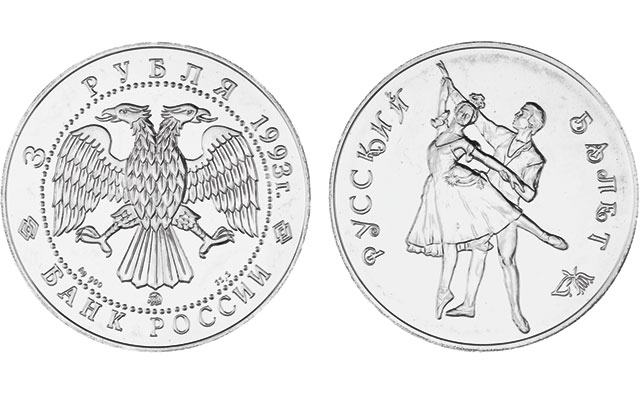 Ballet as an art form is most closely associated with France and Russia, although ballet is enjoyed all over the world. This 1993 silver 3-ruble coin from Russia commemorates the Bolshoi Ballet. 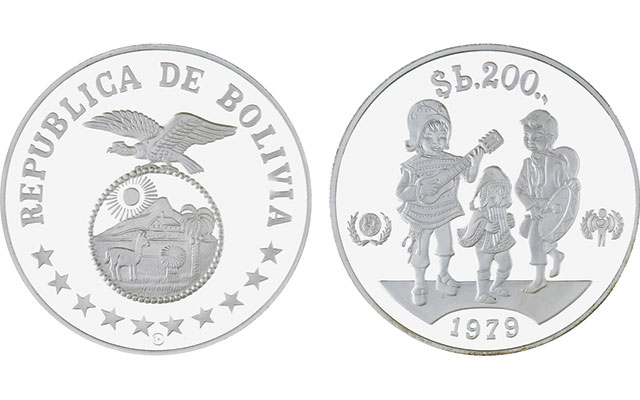 Of the five major groups of musical instruments, three are depicted on this 1979 200-peso coin, a drum (membranophone), a panflute (areophone), and a charango (chordophone). Struck for the International Year of the Child, this is one of the most “musical” world coins ever minted. 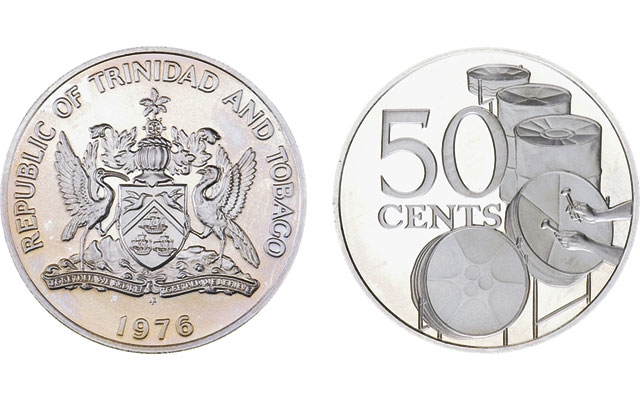 The drum is featured more often on world coins than any other musical instrument. Drumming has always been an important fine art in human history. This Proof 50-cent coin from Trinidad & Tobago was one of 10,000 minted by the Franklin Mint. 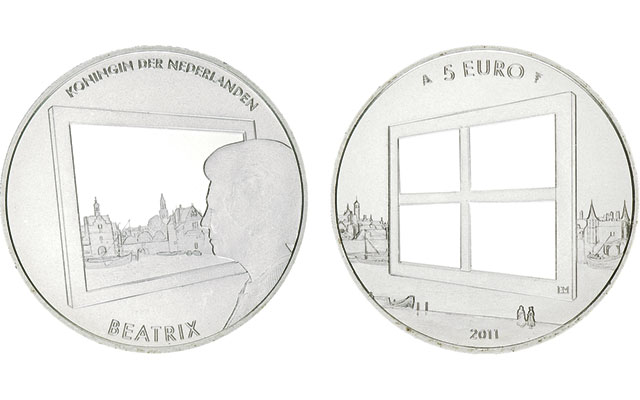 This Netherlands €5 coin shows Queen Beatrix looking at a Jan Vermeer painting, as if in a museum. The reverse depicts an exterior view of the same scene, with the painting now forming the background and a closed window in the middle. 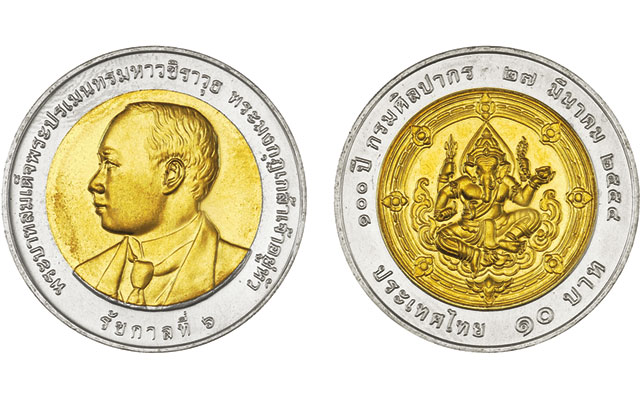 This 2011 ringed-bimetallic 1-baht coin from Thailand celebrates the 100th anniversary of the Department of Arts and features the Hindu elephant-headed god Ganesha on the reverse. Ganesha is both the emblem of this department and the patron of arts and sciences. 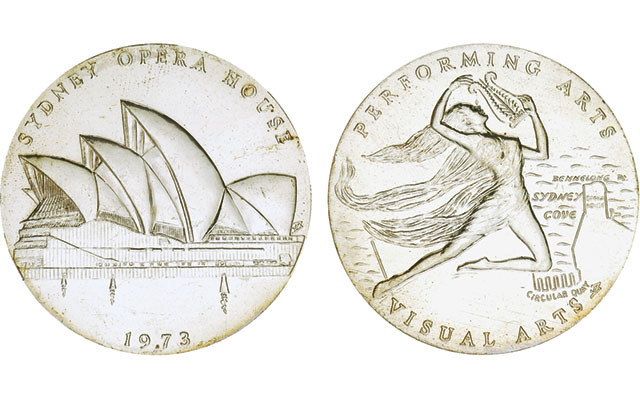 Ever since opening in 1973, the Sydney Opera House has been home to many of the visual and performing arts of Australia. As an architectural wonder, the outside is a fine art, too. 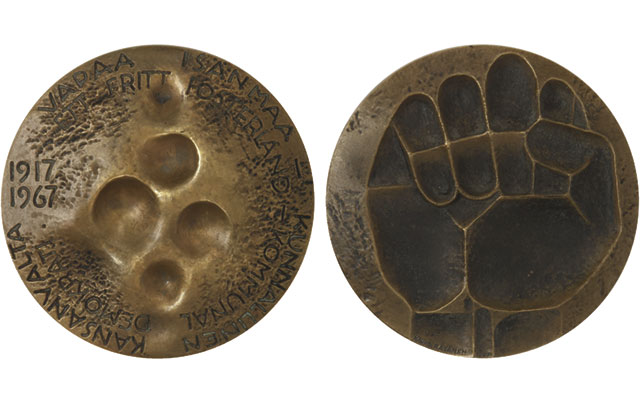 The production of art medals or table medals is a fine art, too. Many art medal collectors like the work of Kauko Räsänen of Finland. This 1967 bronze medal with an animal footprint on one side and a human fist on the other in high relief commemorates Finland’s 50th anniversary of independence from Russia.

One could build a large collection of world coins concentrating solely on the fine arts. World coins celebrate art, sculpture, architecture, dance, drama, music, and other forms of live entertainment. They also depict buildings of cultural importance like theaters, ballet and opera houses, and fine arts academies. Finally, there is the art medal, the production of which is a fine art in and of itself.

All fine arts are visual in nature and are judged for their beauty and meaning. So while music is auditory, for example, the visual component of an opera or live concert transforms music into a visual fine art.

A series of Danish medals celebrates some of the fine arts enjoyed by the public at the Tivoli Gardens, the world’s second oldest amusement park, opened in 1843. These silver and bronze high relief art medals produced between 1976 and 1983 are a fine art commemorating a fine art, resulting in a double dose of culture.

The 1976 medal was designed by the Austrian artist Helmut Zobl (born in 1941), who focused on Tivoli’s Pantomime Theatre. Both sides show the open-air theater that is famous for a curtain that unfolds like a peacock’s tail. The theater features pantomime, ballet and modern dance productions. Other medals in the series depict a display of fireworks, a performing orchestra, and an acrobatic show.

As a fine art, ballet is most closely associated with France and Russia, although it is enjoyed all over the world.

Ballet is very important in Russian culture, and the coins and medals of the nation bear witness to that. One silver 3-ruble coin issued by Russia in 1993 commemorates the Bolshoi Ballet, of Moscow, founded in 1776. The famous dance company began life in 1773 as a dance school for orphans.

Humans not only enjoy listening to music, they like watching it performed, too. All musical instruments can be divided up into five groups. Three of these are represented on a Bolivian 1979 200-peso coin: a drum (membranophone), a panflute (areophone), and a charango, a small 10-string guitar (chordophone). Struck for the International Year of the Child, this is one very musical world coin.

The drum is featured more often on world coins than any other musical instrument, because drums in many forms have always been an important part of human musical history. A drum native to the island nation of Trinidad and Tobago takes center stage on a Proof copper-nickel 50-cent coin that was minted by the Franklin Mint in 1976.

Painting is a visual feast for the eyes. Titled “The Art of Painting,” this creative 2011 Netherlands €5 coin uses both sides to show this and to honor the Dutch masters Vermeer, Rembrandt, and Van Gogh. Queen Beatrix (then the ruling monarch) is seen on the obverse looking at the View of Delft, the 1661 Jan Vermeer painting. The reverse is an exterior view of the same scene, with the painting now forming the background and a closed window in the middle.

Like ballet, opera is a European fine art that has spread around the globe. Its roots date back to the late 1500s to Italy.

Ever since opening in 1973, the Sydney Opera House has been a center of many visual arts. As with the famous Vienna State Opera House, it is a fine art architectural masterpiece on the outside that fosters the arts inside. Australia has issued several Sydney Opera House coins and medals including a 1973 Grand Opening medal that also features a dancer.

Thailand often commemorates its governmental departments and academies on its coinage, including those that teach and promote the fine arts.

In 2014, a coin was issued on the 100th anniversary of the School of Arts and Crafts, and in 2011, it was a ringed-bimetallic 10-baht coin dedicated to the 100th anniversary of the Department of Arts. It features the Hindu elephant-headed god Ganesha on the reverse. Ganesha is both the emblem of this department and the patron of arts and sciences.

Art medals or table medals are a fascinating fine art.

Many world art medal collectors are familiar with the work of Kauko Räsänen. Born in Finland in 1926, he is known for his bronze medals that inspire and surprise. One example created in 1967 to commemorate Finland’s 50th anniversary of independence from Russia is struck in extreme high relief. An imprint on one side of a human fist symbolizes the strength of the people, and an animal track in the snow on the other side symbolizes Finland.