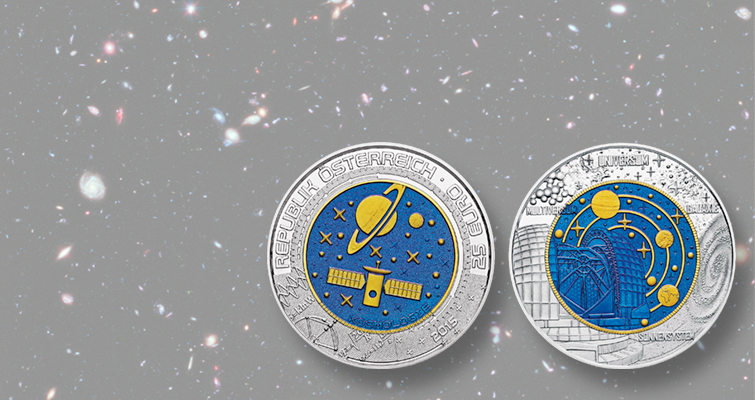 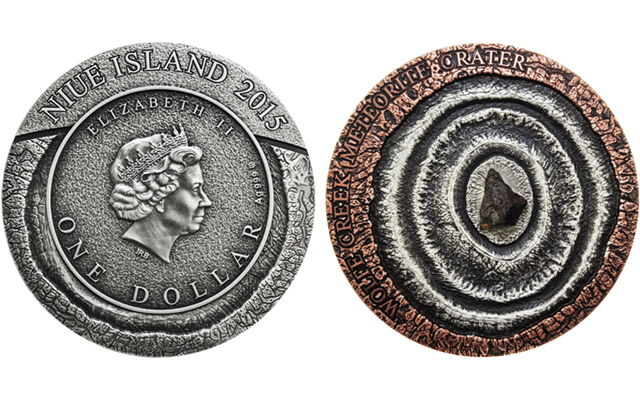 A 2015 dollar coin from Niue struck by the Mint of Poland celebrates the Wolfe Creek Meteorite Crater in Australia, featuring a piece of the actual meteorite.

Editor's note: The following is the third and final part of a multi-part Coin World series about the prominence of space-themed collector coins from all over the world prepared by Louis Golino for the October 2015 monthly edition of Coin World.

In late 2014 the Austrian Mint announced that on Jan. 21, 2015, it would release the 13th coin in its acclaimed €25 series that consists of a center made of niobium and an outer ring of silver.

This series has focused on themes in science and technology, especially European contributions to this field. Despite having annual mintages of 65,000 coins, these coins are so popular that many issues have increased from an issue price of about $70 to several hundred dollars because demand outstrips supply. Several coins in the series have also received awards.

The 2015 coin is dedicated to the biggest subject of them all, cosmology, or the study of the universe’s origins and development, and the coin shows the ringed-planet Saturn and the European Union’s Rosetta space probe (which recently landed on a comet) on its obverse, and the reverse depicts the European Extremely Large Telescope that when completed by 2022 will allow humans to see further into space than ever before.

Typically the coins in this series take at least a year to sell out of their full mintage, but the 2015 issue sold out from the Austrian Mint while the coin was still on pre-order.

By the time the coin started to be released in February and March, retail prices had already almost doubled to about $120 per coin. This marked the first time a coin in this series sold out and began appreciating that quickly. According to Ola Borgejordet, owner and founder of the Royal Scandinavian Mint in Utah, the sell-out was largely due to promotion by the Austrian Mint.

In April of this year an impressive moon coin was issued by Niue, the first in a new series about our solar system. Like other coins issued under the legal authority of that small island nation, the coin was produced by the Mint of Poland, which was founded in 1766 and is one of the world’s leading mints that uses cutting-edge technology to create remarkable collector coins.

The new Moon coin is the first one to faithfully depict the surface of the moon with all its craters and the first to make full use of the concave/convex shape. It is minted in ultra high relief with an antique silver finish, and has a tiny mintage of just  686 coins.

When this coin was offered for pre-order in March by its U.S. distributor, First Coin Company, and on eBay, the price for it jumped in a matter of hours from $150 to $250 to $300.

Various coins also honor different countries’ efforts at space exploration, such as China’s landing of a probe on the moon, Canada’s Space Agency, and more.

In April the Central Bank of the Russian Federation issued a 3-ruble colorized silver coin that celebrates the 50th anniversary of the first spacewalk, which was accomplished by cosmonaut Alexei Leonov on March 8, 1965 (Leonov is still alive and is now 80 years old).

It is clear from this overview of the major space and astronomy-themed coins issued since 2009 that collectors are very keen on this subject matter, especially when the design, shape, and color combine to form a stunning coin.

It is equally clear that collector demand for these coins has helped to support a strong market for them. No one is going to get rich from them, and not all perform equally well, but there is a clear trend. The more popular and innovative space coins have been mostly been secondary market winners, increasing substantially in value over time, and this trend is likely to continue.

Moreover, unlike some world issues that depict themes that mainly appeal to collectors from the country of issue, space-themed coins have global appeal, especially as more countries have become involved in space exploration.

A possible three-coin U.S. commemorative series is currently being considered for 2019 to honor the 50th anniversary of Apollo 11’s moon landing in 1969 and would include a copper-nickel clad half dollar, silver dollar, and gold $5 coin with a concave/convex shape to look like the moon. Legislation was introduced in June to mint these three coins plus a Proof 5-ounce silver dollar in the same shape.

These coins, if minted, are sure to be a big hit with collectors all over the world.