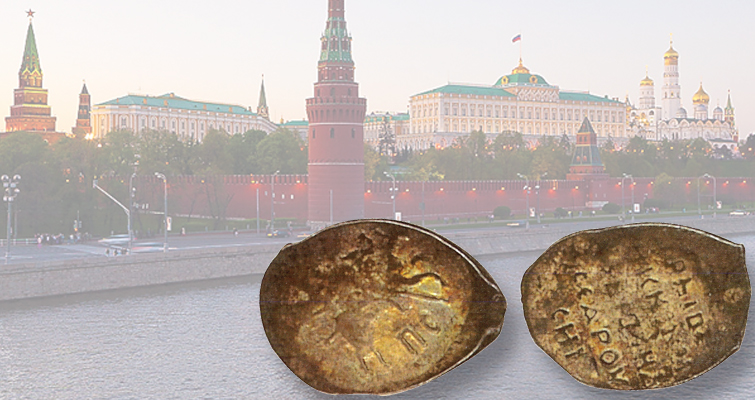 Russian wire money includes these tiny silver kopek coins that were likely issued during the reign of Michael I, the first Romanov czar.

Attached is a picture of what I have been told are old Russian coins. The coins are tiny and have been magnified 400 percent in the picture. Any help you could give me in identifying these would be greatly appreciated.

The reader submitted images of tiny Russian kopek coins from the time of Mikhail Fedorovich, or Michael I, who served from 1613 to 1645. Michael I was the first czar of the Romanov Dynasty, which would rule Russia for 300 years until being ousted during World War I.

The tiny kopeks are part of a larger series known as “wire money.”

Wire money was produced as early as the 14th century and issuance continued into the beginning of the 18th century; it was issued in both denga and kopek denominations, depending on the time period when a particular piece was produced.

According to dealer Joel Anderson, “The coins were struck by taking a piece of silver wire, cutting it to the proper weight, then smashing it between a pair of dies by a strong-armed Russian,” he wrote at his website.

“As might be expected, the coins are quite crude, small and are usually struck partly off-center. [Many examples of wire money show] a horseman on one side and legends on the other.”

Following the death of Ivan the Terrible in 1584, Russia fell into a period of chaos and civil war.

In an effort to bring an end to the fighting, in 1613 the Council of All Russia elected the 16-year-old Michael as czar.

“Though many expected him to fail, the young Michael slowly established his control over Russia and wisely avoided involvement in the wars of Europe. By the time of his death in 1645 he had established the powerful Romanov dynasty,” according to Anderson.

Wire money is, as Anderson notes, crudely produced, and extremely small. We have seen four examples fit on one side of a Lincoln cent. There are thousands of varieties, weighing from 0.17 to 0.68 grams.

Today, wire money may be purchased for as little as $5 to $20, depending on condition and ruler.