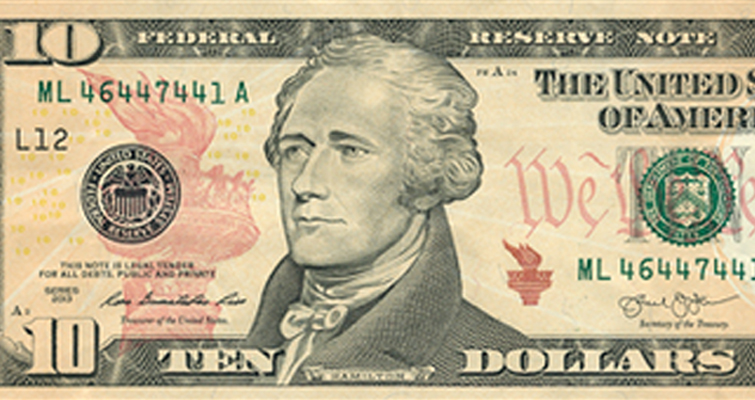 The $10 FRN currently stars Alexander Hamilton, the nation's first secretary of the Treasury, among his many accomplishments.

Everyone has now heard about Treasury Secretary Jacob Lew’s announcement that a redesign of the $10 bill will feature a woman’s face. This summer the public has had an opportunity to express a choice of who will be the first woman on our paper money since Martha Washington appeared on the face of the 1886 $1 silver certificate.

Many, including former Fed chairman Ben Bernanke, castigated Lew and, by inference, the Obama administration, for this decision. Opponents insist the change be made to the $20 bill, supplanting a less popular Andrew Jackson with a woman’s face. Having a woman’s face on the $20 bill to be released in 2020 is the goal of women’s groups — the so-called “20-20” proposal commemorating the 100th anniversary of the 19th Amendment giving women suffrage.

The sawbuck since 1929 bears the portrait of Alexander Hamilton, who is credited with establishing the nation’s Treasury and was its first secretary. The $20 Federal Reserve note, however, was recently redesigned and, Lew pointed out, it is now the $10 bill’s turn.

None of the criticisms addressed the possibility that, once released in 2020, this new $10 bill may become a monetary “flop” — it being rejected by the public as were the two $1 coins with images of women.

Those with short memories may have forgotten the nation shunned use of the first two circulating coins with the image of a nonfictitious woman on the obverse. The first, the Anthony dollar, ran for only two years starting with 1979 and for a single year in 1999. The other was the Sacagawea dollar, aka “the golden dollar,” having been minted from 1999. Both coins were released with much fanfare and the enthusiastic support of women’s groups, which had lobbied for creation of the coins.

The Anthony and Sacagawea dollar coins have been avoided by the public as if they are toxic to handle.

At the onset, people hated the Anthony dollar, often confusing it with the quarter dollar. Both are almost the same size, have reeded edges and the same copper-nickel clad alloy composition.

The Sacagawea dollar’s gold-like alloy had production problems and the coin was just plain ugly.

A lesser theory held both Susan B. Anthony and Sacagawea were not well-known personages for the general public to warm up to. Would there then be a curse on women appearing on our money?

One proposal being floated is to move Hamilton to the $20 bill whenever that note comes up again for redesign. This will only serve to confuse the public to have Hamilton on two notes until every Hamilton sawbuck is eliminated from circulation.

Another scheme is to have Hamilton and the designated woman, with no historical significance to each other, share the design on the new $10 note.

Both proposals are counter-productive.

The decision to put a woman on a Federal Reserve note is long overdue and laudable. However, the decision to put a woman specifically on the $10 bill instead of the $20 note of the 20-20 initiative is the wrong one. If Jack Lew persists in replacing Hamilton with a woman for no other reason than they want a woman, will the nation then reject usage of the sawbuck as they did the two dollar coins, opting instead to use more $5 and $20 notes? Paraphrasing Nancy Pelosi, we’ll have to print the new note to find out.

Howard Berlin is author of The Numismatourist: The Only Worldwide Travel Guide to Museums, Mints, and Other Places of Interest for the Numismatist, published by Zyrus Press in 2014. The book is based in part on articles published in Coin World.