Where is the 'golden era?' 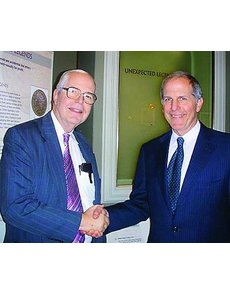 Writer Q. David Bowers, left in photo, in December 2008 with Dr. Brent Glass, then director of the Smithsonian Institution’s Museum of American History, at the opening ceremony of the numismatic gallery on the ground floor. Only a fraction of the National Numismatic Collection is on public display.

The April 7 issue of The Economist included a startling article on military spending by the top 10 countries in the world: United States: $739.2 billion equal to 45 percent of the world’s share with China next at $89.8 billion.

We are devoting a tremendous amount of our national assets to this area. And, of course, it is very desirable that America continue to be the land of the free and to help others in need.

At the same time, I hope that funds can be found to create what might be called a Golden Era for America. In recent years, many aspects of science, art, education, recreation, music, literature and other elements of “the good life” have taken strong hits. The old popular saying, “You can have guns or butter, but not both” is interesting but does not square with reality.

And yet it is the enjoyment of hobbies, recreation, learning about the strange moons of Saturn and enjoying the music of symphony orchestras that adds much to life.

Today, the Smithsonian Institution has to struggle to raise money. Give it $5 billion and watch miracles happen. The National Numismatic Collection is in storage except for a small number of pieces now on display in a nice little gallery on the first floor.

Tens of thousands of other coins, tokens, medals and paper bills could be showcased for everyone to see and enjoy.

In a discussion the other day with the director of a well-known museum in the Northeast, we agreed that two topics that are surefire hot tickets to draw attention are sex and money. Sex can be dismissed, but exhibits on money are interesting and draw a lot of visitors. I remember that at an American Numismatic Association summer convention in 1975 we had a 1913 Liberty Head 5-cent coin on exhibit. Some attention to it had been given in the Los Angeles papers and on television, and a long line of visitors came to see it. Probably, some lingered to learn more and are Coin World readers today.

Returning to the Smithsonian, curator Dick Doty and the staff have mounted many exhibits at ANA conventions and elsewhere to share treasures such as the unique 1849 Coronet gold $20 double eagle. How nice it would be if the Smithsonian could set up a dozen regional museums with government support to rotate coins and other items in and out of display.

If another reason is needed, coins are educational. An hour spent with coins is an hour spent learning the U.S. social, political, military and financial history.