What is a horse blanket note? 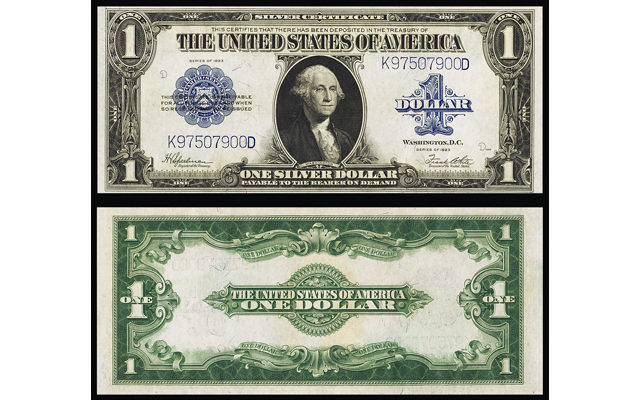 This Series 1923 $1 silver certificate is an example of a "horse blanket" note, referring to the larger size of the note compared to small-size notes of today.

So it is no surprise that when newer collectors come across a term in an old catalog or reference book that they’ve not heard of before, they start asking questions.

Here’s one Coin World has heard many times before: What does it mean when a catalog/book refers to a “horse blanket” note?

The quick answer is that the term “horse blanket” note is sometimes used as a general nickname for large-size notes of all types.

You may see the term “horse blanket” or even “saddle blankets,” especially when referring to the large-size Series 1923 silver certificates.

The face of those notes feature a portrait of George Washington. At first glance the design looks like an early small-size Federal Reserve note, but a closer look reveals the note bears blue serial numbers, Treasury seal and a large numeral 1. Blue was the designated color for silver certificates.

The back design is fairly plain, compared to other large-size silver certificates. The text across the back THE UNITED STATES OF AMERICA / ONE DOLLAR, nearly fills the center of the note. Three numeral 1s each appear on the right and left sides of the design.

While those so-called “horse blanket” notes were large, at 3.125 inches by 7.375 inches it is an exaggeration to say they could cover a horse’s back underneath its saddle.

When small-size notes were introduced, banks and manufacturers prepared the public for a change in the size of wallets and money purses. The downsizing would accommodate the new sized paper cash.