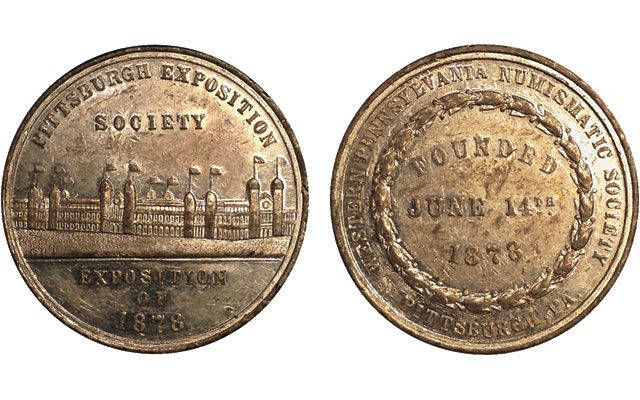 The Western Pennsylvania Numismatic Society issued medals for its 1878 founding in conjunction with the 1878 and 1879 Pittsburgh Exposition Society fair. The medal shown is in white metal. 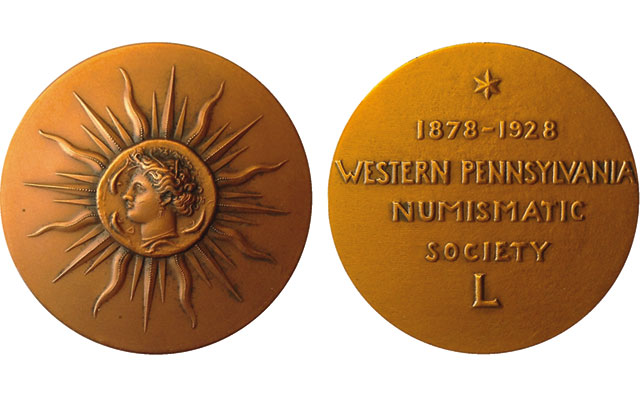 Copper medal from the WPNS’s 50th anniversary in 1928 was struck by Medallic Art Company.

The Western Pennsylvania Numismatic Society celebrated its 100th anniversary as a member club of the American Numismatic Association with a Nov. 4 dinner in Pittsburgh.

The society wounded June 14, 1878, for the study of numismatic science and to exchange ideas and information. The organization currently has a membership of 30 men and women.

WPNS became an ANA member club during the summer of 1914 when its members applied for and received ANA Branch No. 6. The club is now recognized as Life Member 100006.

Moran is the author of the 2007 reference, Striking Change: The Great Artistic Collaboration of Theodore Roosevelt and Augustus Saint-Gaudens.

WPNS still meets monthly during which a member presents a formal program of numismatic interest.

From its inception, the WPNS established a legacy of medallic anniversary tributes that collectors may encounter in the numismatic marketplace.

In conjunction with the Pittsburgh Exposition Society’s 1878 fair, 35-millimeter medals were produced by George H. Lovett issued on behalf of the WPNS in white metal, copper, brass and silver. The fair was held in what was then known as Allegheny City, today Pittsburgh’s North Side. The white metal medals. of which 2,000 were struck, were sold for 25 cents each.

The reverse common to both 1878 and 1879 issues bears an inscription reflecting the WPNS’s founding. The obverse, depicting the year of issue, depicts one of the expo buildings.

For its 50th anniversary in 1928, WPNS had Medallic Art Company strike medals in silver and bronze featuring designs by Audrey Avinoff depicting on the obverse a decadrachm of Syracuse with cresses-shaped radiations symbolizing the diffusion of knowledge, inspiration and culture that numismatics has contributed to civilization.

MACO restruck the medals in gold, silver, copper and bronze versions in 1963, with 1963 incuse on the edge for differentiation.

In 1978, for its 100th anniversary, WPNS issued medals in bronze, silver and gold, with the obverse incorporating smaller renditions of the obverse designs from the 1878 and 1928 anniversary medals.

The WPNS meets at 7 p.m. the first Tuesday of every month at the Mount Lebanon United Methodist Church, 3319 W. Liberty Ave., in Dormont, south of Pittsburgh.