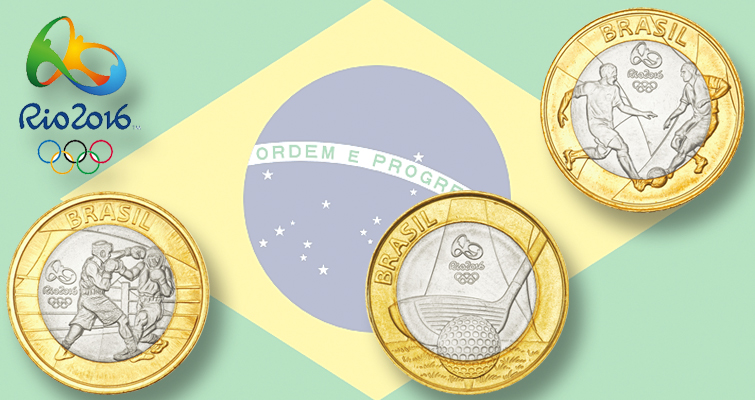 Brazil has made collecting coins celebrating the 2016 Rio Games affordable and easy, with 14 different circulating 1-real coins showcasing some of the sports being contested in 2016. Three of the coins celebrate boxing, golf and soccer (football).

Editor's note: this is the first part of a story by Jeff Starck about the Rio 2016 Olympic coins. The story originally appears in the August monthly issue of Coin World.

The Olympic Games give host nations a chance to show off their cities, people and culture, and oh yeah, to stress the viability of the economy. When Rio de Janeiro, Brazil, plays host to the Summer Games from Aug. 5 to 21, the nation will be on full display for millions of watchers around the globe, for good or ill.

The 2016 Games have been mired in controversy (but then, what Games of recent memory hasn’t been dogged by various anxieties?). A corrupt and unstable government has been overshadowed lately by health concerns surrounding the Zika virus and polluted waters.

It seems likely that the concerns will disintegrate in a swarm of feel-good montages about underdog athletes and come-from-behind victories as the Games get going in early August. The construction clock will be erased by the medal count, and long after the television crews and sponsors and athletes leave Brazil for their homelands, the guts and glory of the athletic performances will come to define the Games more so than any glitches.

A record number of countries are slated to participate in a record number of sports, sending some 10,500 athletes from 206 national Olympic committees, including from first time participants Kosovo and South Sudan.

Rio will become the first South American city to host a Summer Olympics (though it is actually winter in that hemisphere), and the event will be only the third Games ever held in the Southern Hemisphere. The Rio Paralympic Games follow the Olympic Games from Sept. 7 to 18.

Coining it in for Olympics

The practice of issuing commemorative coins in celebration of and in conjunction with an Olympic Games began in modern times with two coins for the 1952 Helsinki Games. In recent years (London’s 2012 Games, for instance, with more than 120 coins, according to Albert Beck’s book Olympic Coins Helsinki 1952 to Rio 2016), the number of coins has tested the stamina of collectors’ desires and pocketbooks.

The Banco Central do Brasil, in comparison, has issued a relatively modest program of circulating and collector coins for the Rio Olympic and Paralympic Games.

The 16 circulating coins, each of which has a mintage of 20 million pieces (for a population of 200 million Brazilians), celebrate some of the sporting events during the Olympic and Paralympic Games. Each is a ringed-bimetallic coin.

The Proof .925 fine silver coins honor the flora, fauna, music and architecture of the host country, and the Proof .900 fine gold coins celebrate three competitions and the torch that defines the flame of competition inside all athletes.

The central bank has not disclosed how the balance of the mintage of silver and gold coins may be offered, whether in sets or other products.

The large program has been released in four bursts, with four each of the 1-real and 5-real coins (one from each of the four thematic categories) joined by one 10-real coin in each release. One release occurred late in 2014, two releases in 2015, and one in 2016 in the lead-up to the Games.

The silver coins share common obverses based on theme, so all Fauna coins show cyclists at the Fioresta da Tijuca, a tropical rainforest in Rio.

All Flora coins depict on their obverses rowing at Lagoa (a name meaning, appropriately, "pond"). Beach volleyball players cavort on the famed sands of Copacabana on the obverse of the four Music coins, and runners take strides at Aterro, a park, on the obverse of four Architecture coins. 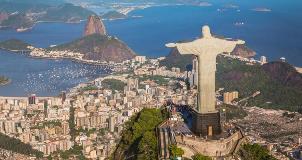