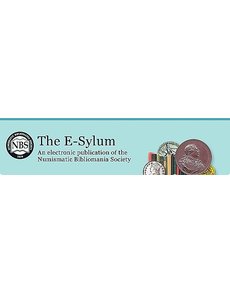 Masthead of The E-Sylum notes that it is an electronic publication of the Numismatic Bibliomania Society.

“Anybody here have email?”

It would be surprising if, in 2012, any working-age person would fail to answer “yes” to this question.

Twenty years ago, however, when Numismatic Bibliomania Society member Wayne Homren began asking that of his fellow NBS members, hardly anyone responded. The Internet was second nature to Wayne, for he had been using it since 1980, when he had started working at Bell Labs.

Finally, in August of 1998, at the NBS annual meeting in Portland, Ore., a dozen hands went up, and Wayne sniffed opportunity. He envisioned an electronic newsletter that could keep NBS members in contact with each other between appearances of their quarterly print journal, The Asylum.

Accordingly, on the morning of Sept. 4, 1998, the NBS’s inaugural email publication was sent to 49 wired members. It didn’t have a name at first. Wayne wanted to call it The Babbler — that being what people in an asylum are wont to do — but NBS Board members liked his second choice, The E-Sylum, suggesting an electronic version of The Asylum.

By any name, The E-Sylum was a hit. Only a few hours after its first inbox appearance, the roster of subscribers grew to 59: an increase of more than 20 percent in a single day! The list quadrupled during the next six years, in the process outstripping the membership of the NBS. Today, more than 1,500 E-Sylumites scattered around the world eagerly await the lengthening shadows of Sunday evening, when the latest version, still edited by its founder, pings into the email inbox.

Why has The E-Sylum been so successful?

Timeliness is surely one reason. It contains breaking news about new books, auction catalogs and price lists, along with reviews and the latest NBS happenings. Its length and variety provide another reason, for each week brings more than 20 pages of fascinating stories, covering all aspects of numismatics — not just numismatic literature — meaning that you are almost guaranteed, no matter what your specialty, to find something of interest.

Still another reason is that The E-Sylum is the best place to ask that tough question, for Wayne’s list of subscribers includes the biggest brainiacs in the world of coins, among them Eric P. Newman, Q. David Bowers, D. Wayne Johnson, Ken Bressett, John W. Adams, John Kraljevich and George Frederick Kolbe. This stellar lineup unfailingly answers even the most arcane questions.

Finally, there is the genial hosting of Wayne himself, who moves deftly from light-hearted banter to heavy-duty scholarship to plain-spoken editorials. If there is something rotten in the (numismatic) state of Denmark, he will call it out, but he also delights in the whimsical and the out-of-the-way. In fact, Wayne has concocted elaborate hoaxes on April 1 or thereabouts, keeping coin literature fanatics on their toes.

Thanks to the generosity of the NBS, every issue of The E-Sylum — that’s pushing 1,000 — is available for free at the NBS website: www.coinbooks.org. This priceless archive is searchable, and no topic is too obscure.

Are you interested in restoring leather bookbindings? Four articles on that topic. How about Bungtown tokens? Three articles on that one. Subscribe to The E-Sylum. It’s more than just free: it’s e-mazing!