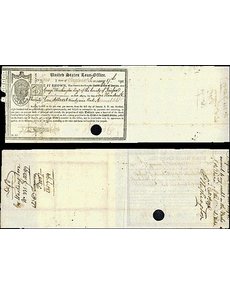 This 1792 United States loan certificate is made out to George Washington. The close-up image shows Washington’s hand-signed endorsement on the back. The certificate will be offered at auction by Archives International LLC during the Oct. 17 to 19 Wall Street Coin, Currency and Collectibles Show in New York City.

One of only three known United States loan certificates made out to George Washington in 1792 and endorsed with his signature on the back will be offered at auction in October.

The loan certificate will be offered by Archives International LLC during the Wall Street Coin, Currency and Collectibles Show Oct. 17 to 19. The auction and show will be held at the Museum of American Finance on Wall Street in New York City.

This loan certificate is the only one available to the public, said Robert Schwartz of Archives Inter­national LLC. It has an estimate of $35,000 to $70,000.

The loan certificate in the auction, No. 335, is dated Jan. 17, 1792, and is made payable to “George Washington, Esqr of the County of Fairfax [Virginia] or his assigns.” The loan certificate was for $123.99 and would bear an annual interest rate of 6 percent.

This loan certificate was part of the first series of loans granted through Treasury Secretary Alexander Hamilton’s plan for the new federal government’s assumption and consolidation of state and foreign debts.

“Stocks and bonds of any type issued to and signed by Washington are of extreme rarity,” Schwartz said.

Visitors to the show and auction can see one of the other two examples of loan certificates issued to Washington, because No. 336 is in the Museum of American Finance. The third known piece, No. 353, is in the archives of the George Washington University Library, according to Schwartz.