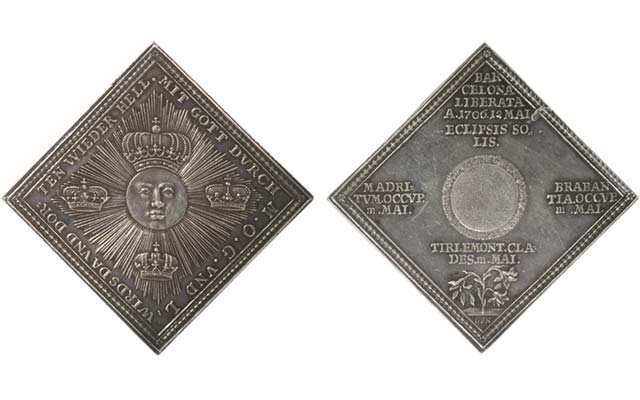 Historians have often pointed out that the War of the Spanish Succession, 1700 to 1714, was a true world conflagration that pitted the major European powers against each other in battles around the globe. Austria and the Maritime Powers of Great Britain and the Netherlands faced off against the France of “Sun King” Louis XIV, Bavaria and a few lesser countries. The war was fought in Spain, the Netherlands and across the German states as well as in America (as Queen Anne’s War).

War broke out upon the death of Spain’s last Habsburg King, Charles II, a feeble and childless ruler who had been induced to sign a will naming as his successor a grandson of Louis XIV, Philip Duke of Anjou. The succession of the Duke of Anjou brought acute danger of a French takeover of Spain and its vast overseas empire. Holy Roman Emperor Leopold I countered by announcing the succession of his second son Archduke Charles to the Spanish throne.

The Duke of Marlborough, was the British commander.

Fighting in Spain itself was inconclusive for several years. Central Spain and Madrid went for the Duke of Anjou, proclaimed King Philip V. Barcelona, Catalonia and Valencia supported Archduke Charles, proclaimed Charles III as King of the Spains and of the Indies.

Charles’ high tide came in May to June 1706 with the capture of Barcelona and the conquest of Madrid, which coincided with his major allied victories in Brabant (Belgium). These successes coincided with the May 12 total eclipse of the sun, hailed as divine portent of victory.

The obverse presents a radiant crowned sun with crowns of the allies. The German legend hails God’s favor to commanders Marlborough, Overkirk, the Earl of Galway and Leake whose victories restored the brightness of allied arms just as the sun returned blazing from its eclipse.

The reverse recreates the eclipse, surrounded by four inscriptions recording the capture of Barcelona, Madrid, Brabant and Tirlemont.