Walton 1913 Liberty Head 5c back in the limelight 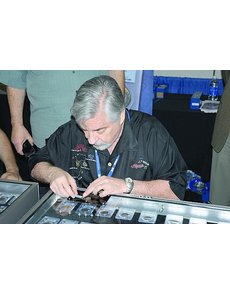 David Hall, co-founder and current president of Collectors Universe Inc., carefully places the PCGS grading insert onto the back half of the custom-made, plastic holder that has housed the Walton family 1913 5-cent coin for more than five decades. 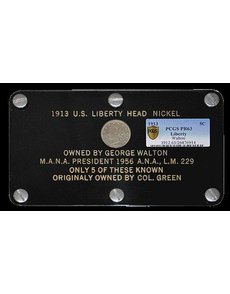 Many numismatists consider the decades-old, custom-made holder as important to the George O. Walton pedigree as the 1913 coin itself. 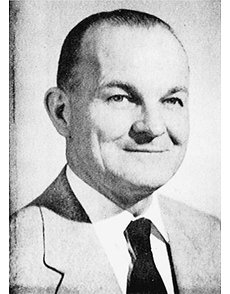 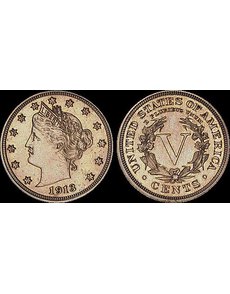 The announcement was made at the PCGS booth during the Florida United Numismatists convention.

Five of the six numismatists who authenticated the coin on July 29, 2003, were reunited for the announcement. The five attending the event were John Dannreuther, from John Dannreuther Rare Coins, Memphis, Tenn.; Fred Weinberg from Fred Weinberg and Co., Encino, Calif., Jeff Garrett, owner of Mid-American Rare Coin Galleries in Lexington, Ky.; Mark Borckardt, senior cataloger and senior numismatist at Heritage Auctions in Dallas; and David Hall, a co-founder and current president of Collectors Universe Inc. in Santa Ana, Calif., and a PCGS co-founder.

Paul Montgomery, executive vice president for business development at American Precious Metals Exchange in Oklahoma City was unavailable to attend the Jan. 11 FUN event. Montgomery did, however, have the opportunity to re-examine the Walton coin two days earlier at the show.

During the American Numismatic Association World’s Fair of Money in Baltimore in 2003, the six numismatists authenticated the coin as the Walton example that had been missing from the numismatic spotlight for more than 40 years.

When the Walton coin was authenticated in 2003, Montgomery was president of Bowers and Merena Galleries in Mandeville, La., and Borckardt was the firm’s executive vice president.

Bowers and Merena, then a Collectors Universe firm, had offered a $10,000 reward just for the privilege to examine and authenticate the Walton coin and a minimum $1 million to buy the piece once it was certified as genuine.

On Jan. 11, during the 2013 FUN convention, Hall, Dannreuther, Weinberg, Borckardt and Garrett recounted with one another their recollections of their 2003 experience in being presented the Walton coin to authenticate.

The Walton coin was recently submitted to PCGS for certification on behalf of Walton’s heirs by Heritage. Heritage will be auctioning the rarity April 25 in Schaumburg, Ill., in conjunction with the Central State Numismatic Society 74th Annual Convention.

Hall said during the Jan. 11 FUN event that PCGS graders had determined the Proof 63 grade before the event. The authenticators believed 10 years ago, in 2003, that the coin would be certified at that grade if submitted to PCGS.

Instead of sonically sealing the coin inside one of the traditional PCGS plastic encapsulations or slabs, it was decided the grading insert would be secured within the custom-made holder produced for the Walton family more than 50 years ago. Hall said the custom-made holder is extremely important to the coin’s pedigree.

Borrowing a dime from one of his fellow numismatists to undo the six screws holding the segments of the custom-made holder together, Hall subsequently placed the grading insert against the front of the black, back portion of the holder before putting the clear cover in place again and securing the holder pieces together with the screws.

Hall said he hopes whoever owns the coin in the future retains the PCGS grading insert within the custom-made holder.

Walton was well-known to have had a 1913 Liberty Head 5-cent coin in a custom-made plastic holder, and he displayed the coin frequently at coin shows from the 1940s through the early 1960s.

In early 1962, Walton was killed in a car crash near Middlesex, N.C., while en route to a coin show in Wilson. Coins valued at $250,000, which included the 1913 Liberty Head 5-cent coin, were scattered along the highway, but subsequently recovered.

According to a July 28, 2003, Coin World article by then editor Beth Deisher, “In 1993 Arthur Smith, an attorney who represented George’s brother, Charles, when George’s estate was being disbursed, confirmed that a 1913 Liberty Head 5-cent coin was recovered and that it was included in the inventory of coins examined by Stack’s in preparation for an auction.”

Deisher continued, “Smith said Stack’s determined that the coin was an altered date specimen. Harvey Stack, owner of Stack’s, confirmed that his firm examined the altered coin and returned it to Walton’s executor.”

Borckardt said his research determined that Stack’s had taken the Walton 1913 Liberty Head 5-cent coin to someone associated with the American Numismatic Society who had made the pronouncement the coin had an altered date.

Stories had been circulating for decades that Walton had both an altered date coin and a genuine piece. According to those stories, the altered date piece would be publicly displayed while the genuine coin was safely secured elsewhere.

The coin resurfaced publicly after one of George Walton’s nephew’s told Coin World in late June 2003 that the 1913 Liberty Head 5-cent coin plastic case with George Walton’s name on it and a coin were still in the possession of the Walton family. Deisher persuaded the family to bring the coin to the ANA show, where it was authenticated and then displayed alongside the other four examples of the coin.

The other four examples of the 1913 Liberty Head 5-cent coin are:

? The Eliasberg coin, PCGS Proof 66, owned by a California collector.

All five coins had come from the estate of famed collector Col. E.H.R. Green. ¦