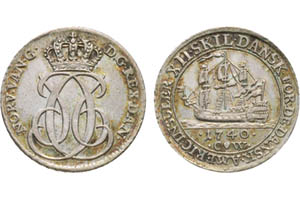 The first coinage issues struck for circulation in the Danish West Indies, now known as the U.S. Virgin Islands, were copper and silver issues featuring the obverse monogram of King Christian VI.

According to law, the “United States” is much more than just the 50 states. It encompasses “the continental United States, Alaska, Hawaii, Puerto Rico, Guam, and the Virgin Islands of the United States.”

The U.S. Virgin Islands, consisting of the islands of St. Thomas, St. John and St. Croix, were known as the Danish West Indies throughout the 18th century. They were claimed by Denmark in 1671, though Columbus had a brush with the island of St. Thomas in 1493. In 1917, the islands were organized as the United States Virgin Islands, and they have been a U.S. territory ever since.

The first coinage issue struck for circulation in the islands was coined in Copenhagen in 1740. Struck in copper and silver, the coins all featured the intricate monogram of King Christian VI on the obverse. The copper 1- and 2-skilling denominations were inscribed with just the denomination on the reverse, while the silver 12-skilling coin depicted a sailing vessel on the reverse in addition to the inscription.

The standard unit of the Danish West Indies was the rigsdaler, composed of 96 skillings, making the 12-skilling coin worth 1/8 rigsdaler, or roughly equivalent to one Spanish real, then the most common small coin in North America and throughout the West Indies.

Some of these 1767-dated restrikes circulated in the mainland North American colonies, and at least a few have been dug up in Virginia, including one 12-skilling coin cut in half to make small change! Base metal counterfeits, typically made of copper or brass and sometimes coated in tin to resemble silver, were also quite common in the era and circulated widely. One extremely rare circulating counterfeit issue actually combines the reverse of a 24-skilling piece with the obverse of the 1783-dated Georgius Triumpho copper.

While few people think of the Virgin Islands when they let their mind wander off to Colonial America, it’s hard to resist coins known to have circulated in North America, whose denominations imitated the familiar Spanish colonial fractions, and that included the inscription DANSKE AMERIKANSK, designating them as truly “American” coins.