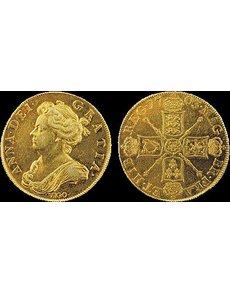 The coin, which was struck from gold seized after a victorious naval battle at Vigo Bay off the coast of Spain, was a surprise find in a handkerchief drawer

The coin, identified with VIGO beneath the bust of the queen, is regarded as one of the most desirable coins in the entire English milled gold series. It sold for double the top estimate from English auction house Gorringes, astonishing the auction house officials, said Gorringes’ Leslie Gillham.

“I don’t think any of us thought it would make that sort of money,” he said.

It was purchased by Knightsbridge Coins. Stephen Fenton, the principal of Knightsbridge, said he bought the coin for an unnamed client.

The newest example was discovered in early September when a longtime customer of Gorringes contacted the firm seeking identification of three coins, two of which were a “very worn George IV silver crown and an even more worn Victorian silver crown,” along with the rare gold coin. The anonymous customer, a widow of retirement age, found the coins, said Gillham, in her late husband’s chest of drawers in what may have been his handkerchief drawer. The story of that discovery appears in Coin World’s Oct. 29 issue.

The provenance of the coin is unknown, as the consignor’s deceased husband had never mentioned it to the family.

Experts with Morton & Eden informally verified the coin’s authenticity for Gorringes, who cataloged it as “Nearly Very Fine.”

Each of the coins has the usual obverse and reverse types appropriate to their denomination but on the obverse of each denomination, below Queen Anne’s bust, the word VIGO was added, engraved into the die. The dies for the VIGO coins were the work of the Mint’s chief engraver, Henry Harris, and his assistant, John Croker.

The gold coins struck are all very scarce to very rare and would be beyond the means of most collectors. The silver coins, however, were struck in generally large numbers. ¦