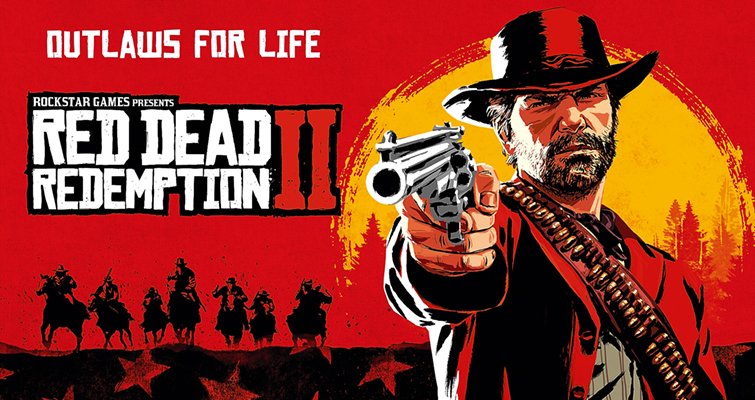 Promotional art for the new game portrays the Old West as a new century neared. 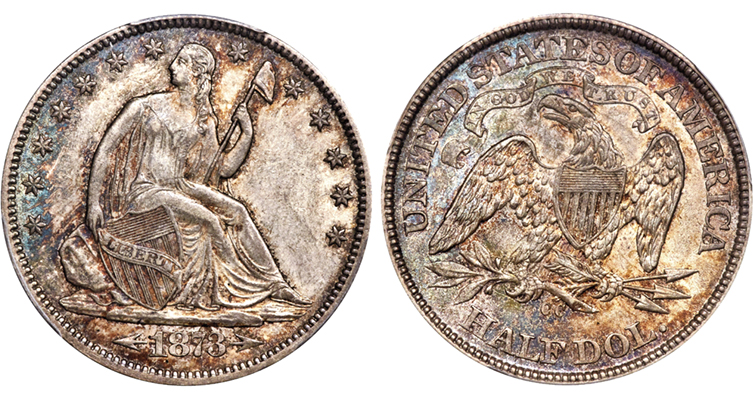 The arrows by the date on this 1873-CC Seated Liberty half dollar denotes a change in silver weight. 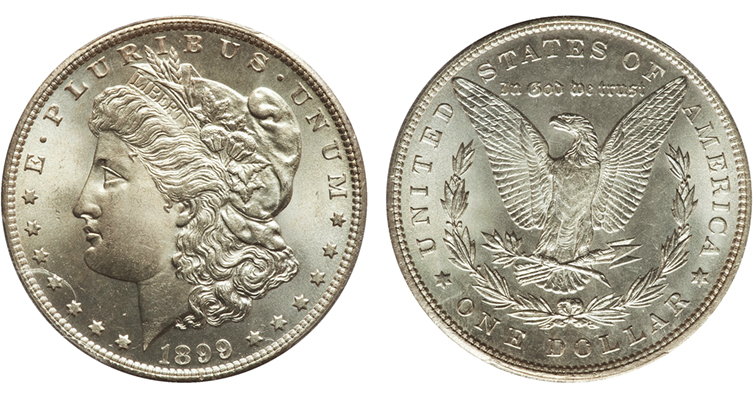 The 1899 Morgan dollar is a rare date that coincides with the setting of Red Dead Redemption II. 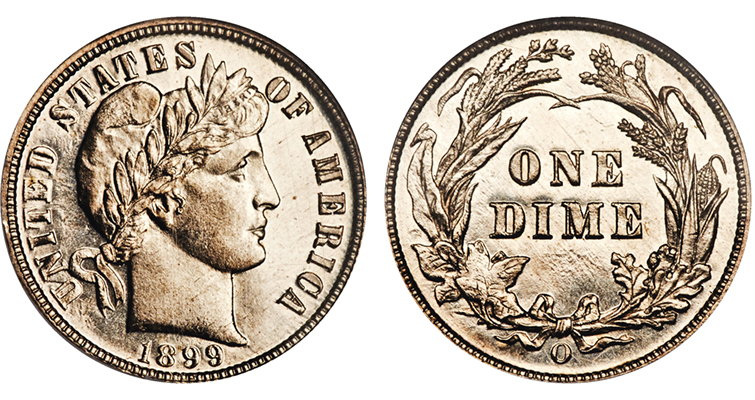 Coins like this 1899-O Barber dime circulated in the West during the time represented in the game. 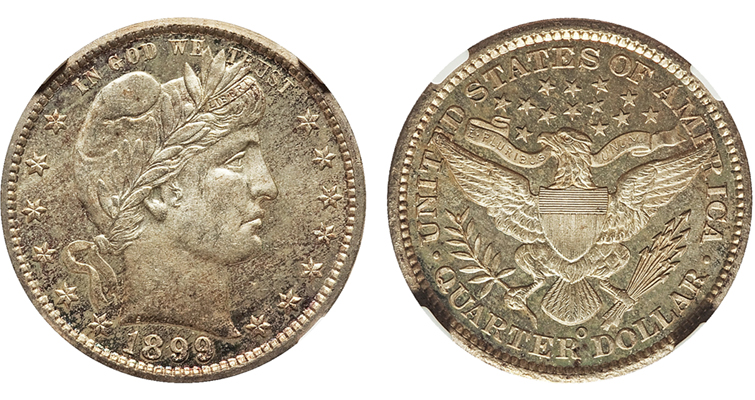 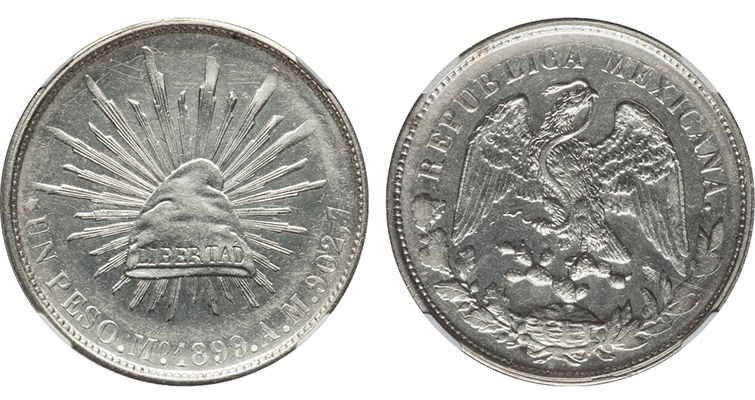 This 1899 Mexican peso was minted in Mexico City. The Mo Mint mark is to the right of the date. The reverse features Mexico’s arms: an eagle with a serpent in its mouth, on top of a cactus. 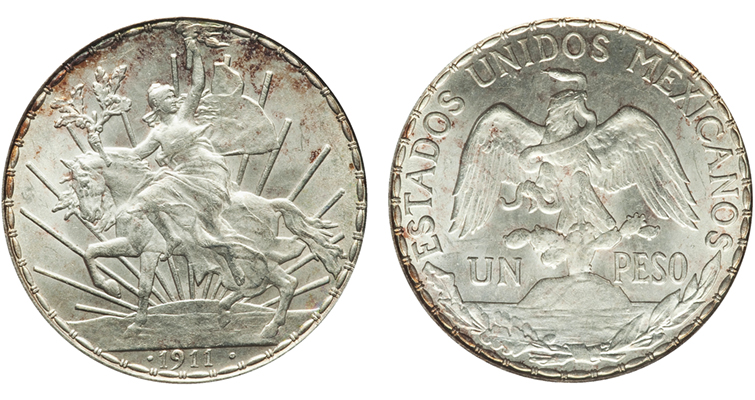 Silver coinage from other countries, like this 1911 “Caballito” peso from Mexico, was still found in the Old West. “Caballito” means “little horse” in Spanish.

Rockstar Games is taking a deep and unsparing look at the Old West with its new title Red Dead Redemption II.

Its historical setting, the American West in 1899, situates the game at a time of transformation, not only for the country, but for the currency of the United States. Whether the Morgan dollar, the sought-after Series 1899 and 1901 $5 and $10 notes featuring portraits of Native Americans and bison, or any of the other pieces of coins and paper currency emblematic of the era, the currency of RDR II will be well known to collectors of U.S. coins and paper money.

A prequel to 2010’s high successful and critically acclaimed Red Dead Redemption, the Red Dead Redemption II game explores the backstory of the Van der Linde gang, a notorious gang whose crimes underscore their collective desire to live a frontier life outside the law. The player takes control of Arthur Morgan, a capable enforcer in the gang, in the aftermath of a botched robbery in the winter of 1899.

Currency is naturally a game mechanic, and players can earn in-game money by robbing banks, stagecoaches, and passersby, or by engaging in a variety of tasks ranging from hunting and fishing to bartering and gambling. This in-game money can be used to purchase supplies, gear, and weapons, just as can be done in the real world.

RDR II features a character named “Levi Strauss,” an Austrian-born bookkeeper who manages the gang’s finances and processes the profits of their criminal affairs.

The currency in circulation at the end of the 19th century on the frontier consisted of a patchwork of federal coinage and paper money, along with local and corporate scrip, local trade tokens and homegrown currencies, and foreign specie. With the consolidation of authority for printing paper money by the federal government during the Civil War, the “wildcat banks” that dominated financial affairs in frontier towns had been supplanted by chartered federal banks that issued national bank notes.

In terms of coinage, cowboys, outlaws, and lawmen roaming the frontier made extensive use of precious metal-based “hard money.” The game’s setting, the year 1899, falls in the middle of the issuing period for the Barber series of coins, the dime, quarter dollar, and half dollar. Minted between 1892 and 1916 at the Philadelphia, New Orleans, San Francisco, and Denver Mints, Barber coins are widely considered among the ugliest coins in U.S. history. Observers at the time snarked that the portrayal of Liberty on the coins’ obverses looked like a man, and that the eagle on the reverses of the quarter dollar and half dollar resembled a scrawny turkey more than America’s national bird.

In addition to the homely Barber coins, Seated Liberty coinage would have been in the pockets of RDR II-era characters. Designed in the 1830s, the Seated Liberty dimes, quarter dollars, half dollars, and dollars entered circulation at the end of the 1830s and the design remained in production until 1891, when it was supplanted by its unpopular successor. The Seated Liberty dollar was minted less consistently than its lower-denomination counterparts, and remains elusive to collectors and very expensive today.

Still, large silver coins would have been common in RDR II’s world. The era’s famous Morgan silver dollar circulated alongside the Seated Liberty dollar, as did Trade dollars. The Morgan dollar, arguably the best know U.S. coin series of all time, was minted between 1878 and 1904, meaning that both newly minted and well-worn Morgans could have traveled with the gang — it is unclear if Arthur Morgan, RDR II’s protagonist, is named as a nod to George T. Morgan, the Mint engraver responsible for the venerable dollars.

Interestingly, one of RDR II’s trailers teases the founding of the Van der Linde gang by referencing a “pair of hucksters trying rob each other … in ’78 or somewhere thereabouts …” The Morgan dollar has thus been around as long as the Van der Linde gang, and likely would have formed the backbone of the currency used by any such gang of the era, and therefore would also make sense for day-to-day transactions in-game.

Additionally, smaller denominations would have been part of daily transactions. The Indian Head cent and Liberty Head 5-cent coins would have been the most recent coins at the time of the game’s setting, though the earlier Shield 5-cent coins were likely in use as well. The silver half dimes that preceded copper-nickel 5-cent pieces and the large cents, nearly the size of a dollar, would likely have been previously plucked from circulation for their precious metal value, or for simple curiosity.

Among the many locales featured in RDR II’s expansive open world is Saint Denis, a sprawling Southern metropolis meant to symbolize New Orleans. The New Orleans Mint, which opened in 1838 and closed its doors in 1909, between the events of the two games, produced much of the coinage that would have circulated in the Old West, and would have been in the pockets of the Van der Linde gang. Though the in-game portrayal of Saint Denis doesn’t include the old Mint building, had the Van der Linde gang visited New Orleans in 1899, they might even have robbed the famous institution of American coinage and numismatic history.

In both RDR and its sequel, the player can cross the border into Mexico, to travel through arid canyons and remote, windswept pueblos and haciendas; along with the sweeping vistas comes an entirely different environment in terms of currency. Before 1857, silver coins of many denominations flowed freely from America’s southern (and northern) neighbors, and in fact the near-mythical “piece of eight” references Spanish imperial 8-real coins, many of which were produced at the Mexico City Mint.

The Mexico City Mint is the oldest operating mint facility in the Western Hemisphere, having opened its doors in 1535. It continues to operate today, minting bullion coins; Mexico’s circulating coinage is now produced at the mint facility in San Luis Potosi.

Nonetheless, the circulating coinage of Mexico in 1899 would generally have been composed of decimalized pesos and holdover real- and escudo-based coinage. The Spanish introduced the maravedies, reales, and escudos after their seizure of what is today Mexico and Central America in the 16th century. Maravedies were copper coins, reales were silver, and escudos were gold. All three types of coins were subdivided into denominations of eight. The legendary “piece of eight” refers to the silver eight reales coins that were often physically cut into eight pieces; such a practice was easier and more widely accepted when coins were valued by their precious metal weight. Before, during, and after the Mexican War for Independence, the coinage in Mexico consisted of non-decimalized currency.

The characters of RDR and RDR II would have encountered a wide array of Mexican coins that trace the fascinating and turbulent history of Mexico from the 16th century to the present. Moreover, the porousness of the border and the need for hard money in rural and frontier regions all but guaranteed that Mexican and other foreign specie circulated in the United States well past the embargo on foreign specie in 1857.

Bison and Native Americans, images traditionally associated with the American Old West, feature prominently on notes printed around the time of the setting for RDR II. The Series 1899 $5 silver certificate displays a portrait of a Native American in traditional garb on its obverse, and the Series 1901 $10 United States note features a bison on a plain.

Such notes would circulate widely in the world of RDR and RDR II, a world where the so-called “Indian Wars” had only just ended and bison still roamed, to some extent, on the frontier. RDR had a significant story arc devoted to the plight of native peoples in the face of American expansionism, and RDR II will have a Native American character in the gang, promising a continuation of the theme.

RDR also featured bison as one of the animals of the game’s natural world. In a nod to the widespread overhunting of bison in mid-to-late 19th century, a finite number of bison are provided in the game, and there is a reward for finding and killing them all; appropriately, the reward’s title is “Manifest Destiny.” Though the Series 1901 note would not have been issued yet by 1899, it is conceivable that criminals of the era of RDR II’s Van der Linde gang would eventually have carried notes emblazoned with an animal emblematic of the American Old West.

Other paper money that circulated in the time period of RDR II’s setting was federally issued, as the paper currency issued by private banks before the Civil War had been effectively taxed out of existence and replaced by various categories of federal paper money. The stability offered by a centralized currency meant that paper money could be used more effectively and endowed with public trust.

Despite that stability, local currencies and scrip were not uncommon at all in the Old West. Many railroad companies in fact paid their workers in scrip, which could be used only at company stores. Abuses of workers by such policies stimulated the development of labor unions, and large-scale strikes were often put down by law enforcement, both from the U.S. government and independent forces, like the Pinkerton detective agency, who will serve as antagonists in RDR II.

There is no indication that RDR II will feature any kind of nonstandard currency, but it is nonetheless possible that a historic character of the era of Red Dead Redemption II would have used a wide variety of paper currency with a broad array of pictorial themes.

Red Dead Redemption II promises a large and engaging open world, with an eye for period accuracy. Though the game itself makes scant reference to numismatic themes directly, the pervasiveness of money as an element of the in-game world, coupled with the historical setting of 1899, means that the characters of RDR II should be steeped in the coins and currency of mid-to-late 19th century America. The mythology of the Old West makes for compelling stories and games, and no shoot-out, stagecoach robbery, or bank heist would be complete without the period currency that the lawmen, bandits, and desperados all sought. The currency of the Old West is among America’s most historic, and numismatists and gamers alike can collect and appreciate examples of the currency in RDR II. 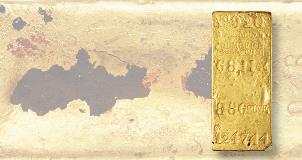 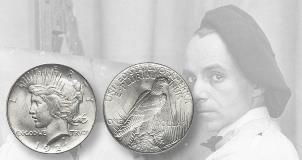 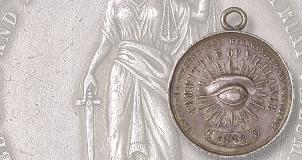