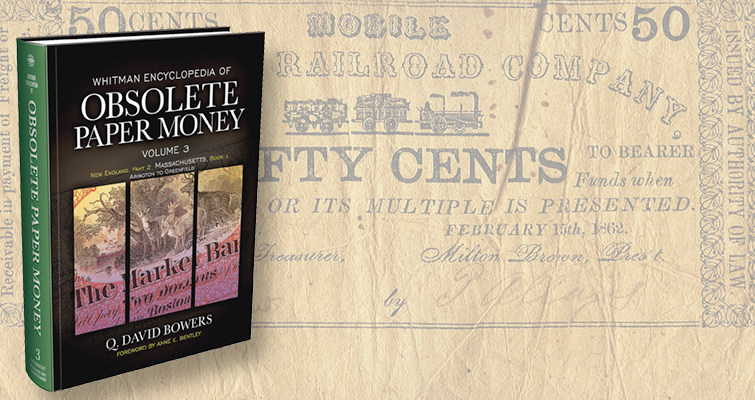 Whitman Publishing has been updating reference literature about obsolete bank notes. The scrip shown here was issued by a railroad.

I am often asked by new obsolete paper money collectors what “the best catalog for obsolete paper money” is for them to obtain as someone new to the specialty. I usually recommend a combination of different references. For the purposes of this article, we’ll assume that the person will be collecting using the most common approach —geographically by state.

Obsolete notes and scrip were issued by thousands of issuers with a dizzying array of different denominations and designs. To complicate things, counterfeiters and other criminals had a field day producing counterfeits and other types of fraudulent notes.

As a result, no one catalog captures the wide array of what is available countrywide. The Society of Paper Money Collectors, along with a few other publishers and authors, has published a large number of catalogs that list the issues, for both bank notes and scrip, of many different states. However, there are gaps in the series, with major states like Illinois, Massachusetts and New York remaining to be done.

Today, many of these SPMC state catalogs are available from numismatic book dealers and other venues like eBay and Amazon.

In 1988, James Haxby, with the help of Walter Allan, produced the monumental overview of antebellum obsolete bank notes, The Standard Catalog of United States Obsolete Bank Notes 1782-1866. Published by Krause Publications, the work comprises four volumes, totaling 2,702 pages. The catalog is still a major reference, used by most serious collectors.

While it covers every state, a couple of issues need to be considered. First, it is now nearly three decades since it was published. Although the work is still remarkably complete, the landmark American Bank Note Co. Archives sale, which brought hundreds of unknown notes to light, occurred after its publication.

Second, necessarily, the Haxby reference excludes any issues that were not bank notes issued by a commercial bank. No merchant scrip, railroad notes, municipal issues and the like were included, and in some states, like Ohio, New York, New Jersey and Pennsylvania, that exclusion eliminated a large number of issuers and notes.

In recent years, the original text was made available in a series of CDs, which makes portability less problematic. Individual volumes often appear on eBay and in booksellers’ lists.

More recently, Whitman Publishing has begun an equally impressive project that will ultimately encompass even more volumes but will also restrict itself to bank notes issued by banks — the work’s size would become unmanageable if the other kinds of notes were included. The series has, thus far, focused on the Eastern states, with the major crown jewel state being Massachusetts.

The first building block should be some combination of volumes from the Haxby and Whitman catalogs, and, if available, the appropriate SPMC or privately published state catalogs.

Next time we’ll talk about additional resources that will prove helpful to your understanding of the subject. Knowledge is power in this field and having the right combination of references will provide the means of obtaining that knowledge.