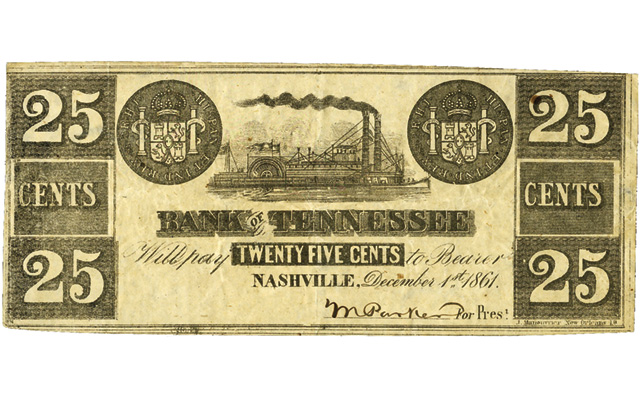 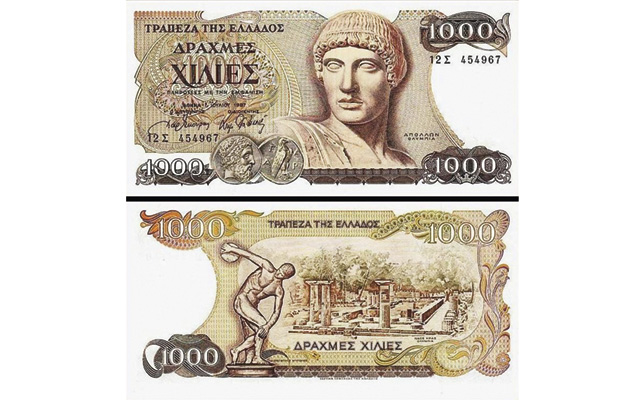 In 1987 Greece issued 1,000-drachma notes with a bust of Apollo on the face, besides the obvere and reverse of a silver stater of Olympia.

Editor's note: The following is the third of a three-part Coin World series about collecting paper money featuring coin designs found on paper money, prepared by Michele Orzano for the January 2015 monthly edition of Coin World.

These obsolete notes are often referred to as “broken bank” notes because many of the banks that issued them between 1782 and 1866 eventually closed due to bankruptcy or other events. More than 3,000 state-chartered banks issued their own paper money.

Banks, however, were not the only issuers of notes during the pre-Civil War era. Railroads, merchants of all kinds and local municipalities all issued paper money in the absence of federal issues.

Some of the best known examples of obsolete note designs featuring coins were issued by the West River Bank in Jamaica, Vermont, in the 1860s. Many of the designs involve cherubs cavorting among large, possibly silver dollar coins.

The design of a $2 remainder note from that Vermont bank shows two cherubs looking as if they are playing a serious game complete with arrows, knife and sword while standing on and behind a Seated Liberty silver dollar (struck 1840 to 1873).

An example of the $2 Vermont note, graded by Paper Money Guaranty 64 Choice Uncirculated Net, for a bit of translucent material in a vignette, was sold for $129.25 in an April 22, 2014, Heritage Internet auction.

A winged cherub rolling an 1854 Seated Liberty silver dollar can be found on $1 notes issued by the Grocers Bank of Bangor in Maine. That note, graded Choice Very Fine by Stack’s Bowers Galleries, sold for $822.50 at the June 26, 2014, Baltimore Expo auction.

A $3 proprietary proof for the Hancock Bank in Ellsworth, Maine, displays several tradesmen sitting among large silver coins. Stack’s Bowers Galleries graded the item as Uncirculated, and sold it for $381.88 in the same June 2014 Baltimore sale.

Also sold in the June 2014 Stack’s Bowers Galleries sale was a $2 note proof for the Washington Bank (New York City), featuring two images of the reverse design of a Spanish colonial silver dollar, the famed 8-real coin or “piece of eight.” The coin design shows crowned Spanish arms between the Pillars of Hercules adorned with the coin’s PLVS VLTRA motto. The note, graded Uncirculated by the firm, realized $2,585. The reverse design of the Spanish coin was also used on a 25-cent note issued by the Bank of Tennessee (Nashville). The note illustrating this article was graded Very Fine 35 by PCGS Currency and sold for $39 in a November 2006 Heritage auction.

Another note, of the same denomination and design, sold for $36 in a Nov. 4, 2014, Heritage auction. The firm graded it Very Good, with a missing top edge piece.

Obsolete notes are often offered in auctions, and some dealers specialize in always having a selection of this type of note. As collectors can see, prices vary depending on rarity and condition. As with any collectible, always buy the best you can afford.

If you want to extend your collection, consider looking for world notes featuring coin designs. The notes of two nations quickly come to mind.

Greece has issued a number of notes of featuring ancient coin designs.

The face of the Greek 100,000-drachma notes, issued in 1944, displays an ancient silver tetradrachm coin with the head of Athena on the obverse and an owl with olive twig on the reverse.

The face of 1945 10,000-drachma notes features a portrait of Aristotle and the obverse, but on the reverse, designs of several different Greek ancient coins are tucked around the borders of the note. That design continued to be issued into the early 1950s.

In 1987 Greece issued 1,000-drachma notes with a bust of Apollo on the face, with the obverse and reverse of a silver stater of Olympia, issued for the Olympic Games in the mid-fourth century B.C., below and to the left of Apollo’s bust.

In 2002, Jordan issued 1-dinar notes that feature the obverse and reverse of a Hashemite silver coin struck in the Kingdom of Hijaz in 1916 on the face of the notes. A portrait of his late majesty Sharif Hussein Bin Ali is also used on the face.

This account is by no means a complete list but it will help collectors begin to keep their eyes open when looking through the next auction catalog or dealer’s bourse case.