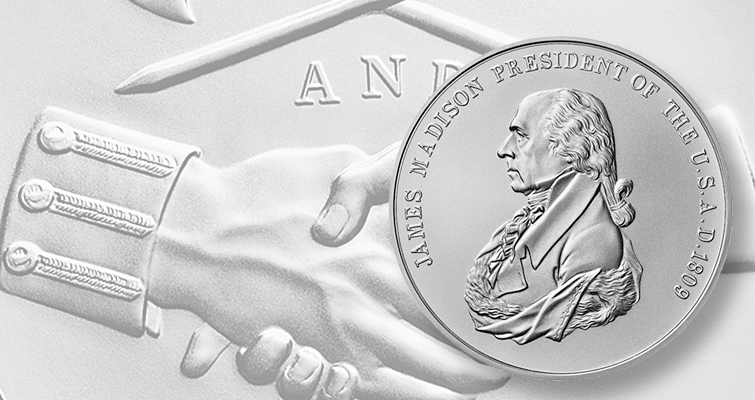 The U.S. Mint will be rolling out sales of the James Madison Presidential medal in silver as part of its ongoing medal series. 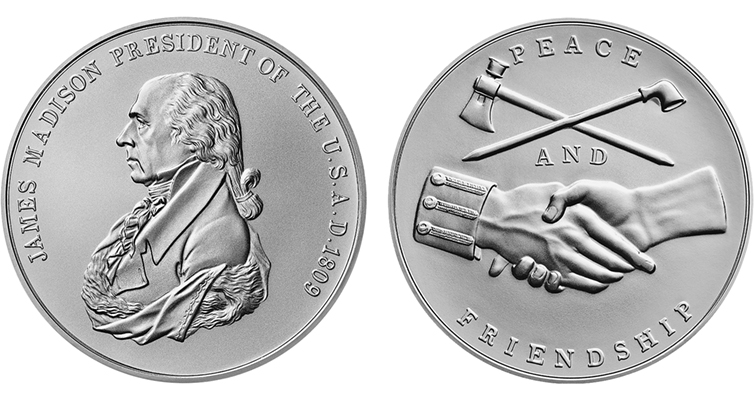 The James Madison silver Presidential medal is the fourth such medal to be issued by the U.S. Mint as part of ongoing medal series in precious metal.

The U.S. Mint will issue the fourth release in its ongoing series of Presidential silver medals when it offers the James Madison medal at noon Eastern Time May 6.

The medal has no mintage or product limits and no household ordering restrictions.

The 1-ounce .999 fine silver medal measures 1.598 inches (or 40.6 millimeters) in diameter, the same specifications as for the American Eagle silver dollar.

The Presidential silver medals will be offered at $39.95 each. The medals have a Matte Finish.

The James Madison silver medal replicates the obverse and reverse designs employed for the Madison Indian peace medals first issued in 1814, five years after Madison took the oath of office as president.

According to R.W. Julian in Medals of the United States Mint: The First Century 1792-1892, the dies for the original Madison Indian Peace medal were executed by U.S. Mint Assistant Engraver John Reich under the supervision of John Vaughan, a prominent Philadelphia merchant and patron of the arts. Vaughan acted as an agent of the War Department in the production of the medals. Although Madison took office in March 1809, the availability of Thomas Jefferson Indian Peace medals and government red tape combined to delay the Madison dies for several years.

Reich completed the dies for three different sizes of Madison medals in December 1814, according to Julian.

The Madison medal obverse depicts a portrait facing left of the fourth president of the United States. The PEACE & FRIENDSHIP reverse for the Madison medal reverted, at Vaughan’s insistence, to the reverse Reich first used for the John Adams Indian peace medal. A crossed tomahawk and peace pipe appear at the top of the design.

The hand of a Native American chief clasping that of a soldier appears without the bracelet adorned with what has been described as a “federal eagle.” That bracelet appears on the reverse of the Jefferson Indian peace medal. 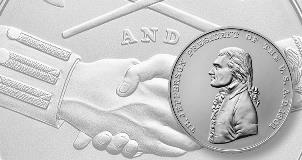 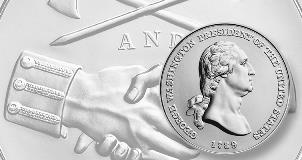