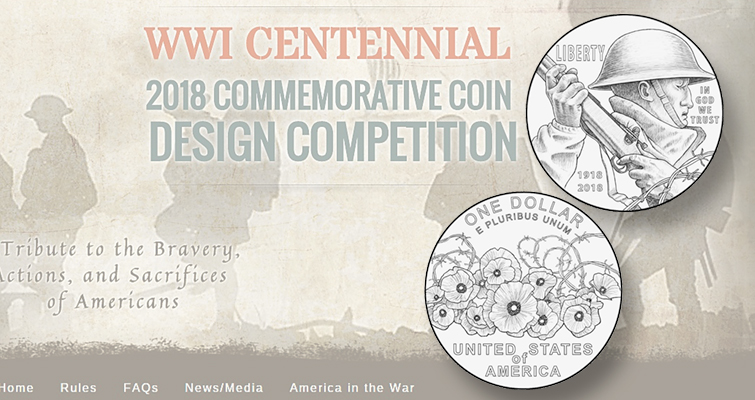 Utah artist LeRoy Transfield submitted the winning designs that will be used on the 2018 World War I American Veterans Centennial silver dollar scheduled to be issued sometime in January. 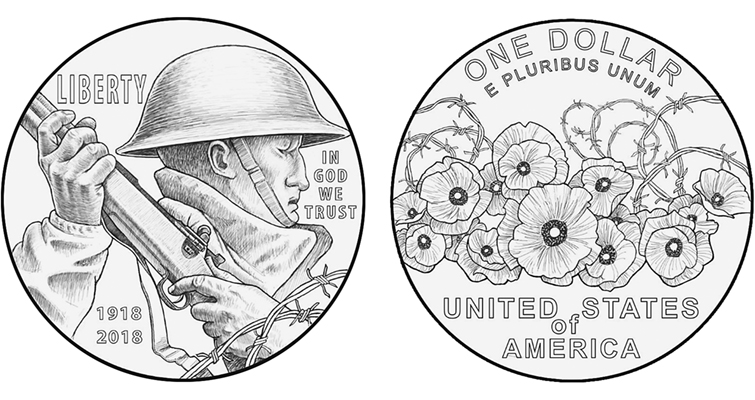 Designs executed by Utah artist LeRoy Transfield have been selected for the obverse and reverse of the 2018 World War I American Veterans Centennial silver dollar.

Transfield’s designs as winner of the legislatively authorized public design competition in 2016 were unveiled Oct. 9 in Washington, D.C., in conjunction with the opening day of the Association of the U.S. Army annual meeting and expo.

Design competition rules originally indicated winning designs would be announced in January 2017, but in April the Mint’s website indicated no time had yet been decided.

For winning the design competition, according to the authorizing legislation, Transfield is to be compensated “not less than $5,000” for his work, according to  Public Law 113-212.

According to the Mint’s rules, "Invited artists will be paid a fee of $1000 for [submitting a plaster in Phase II of the competition] and will be eligible to receive an additional $10,000 (and have their initials appear on the coin) if the artist’s design is ultimately selected."

Transfield’s designer's initials and those of Donald Everhart II who sculptured the designs will appear on the coin. Sculpturing of the 2018 coin designs was among Everhart’s final duties as lead sculptor-engraver on the U.S. Mint engraving staff. Everhart retired July 31 after 13 and a half years as a member of the U.S. Mint engraving staff stationed at the Philadelphia Mint.

Transfield’s obverse obverse design, titled “Soldier’s Charge,” depicts an almost stone-like soldier gripping a rifle.   Barbed wire twines in the lower right hand side of the design. Inscriptions are LIBERTY, 1918, 2018, and IN GOD WE TRUST.

U.S. Mint officials have not disclosed how many artists participated in the first phase of the open design competition nor how many designs, in total, were submitted. According to the rules, no more than 20 artists moved from Phase I to Phase II, when submitted designs were to be accompanied by a plaster. The juried competition was evaluated by a seven-member panel comprised of three members each from the Commission of Fine Arts and Citizens Coinage Advisory Committee and chaired by the Treasury secretary or his designee.

The 2018 silver dollar is to be issued in Proof and Uncirculated versions sometime in January. The maximum combined mintage, according to the enabling legislation, Public Law 113-212, is 400,000 coins. Each coin will carry a $10 surcharge. Net surcharges, after the U.S. Mint recoups all of its production and associated costs, are to be forwarded to the United States Foundation for the Commemoration of the World Wars, to assist the World War I Centennial Commission in commemorating the centenary of World War I.

U.S. Mint officials plan to announce Oct. 10 the approved designs for the five armed forces silver medals that will be issued in conjunction with the commemorative coin program. The medals are not legislatively authorized as part of the coin program, but are being issued under the Treasury secretary’s broad authority to issue medals. A .900 fine silver medal will be issued for each military branch — the U.S. Army, U.S. Coast Guard, U.S. Navy, U.S. Marines and U.S. Air Service.