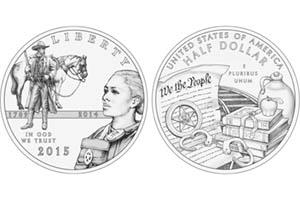 A female, present-day U.S. marshal is featured on the CCAC-endorsed half dollar obverse. The recommended reverse incorporates symbols reflecting the service’s storied history. 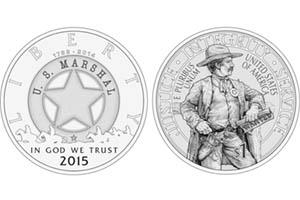 Recommended designs for the silver dollar exhibit a five-pointed U.S. Marshal badge and a gritty marshal of the old West, among other elements. 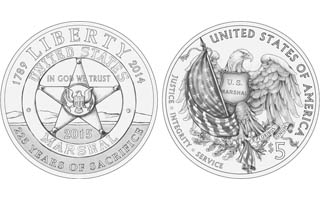 All images courtesy of U.S. Mint. Designs recommended by the Citizens Coinage Advisory Committee for the 2015 U.S. Marshals 225th Anniversary gold $5 eagle reflect the service’s five-pointed star on the obverse. 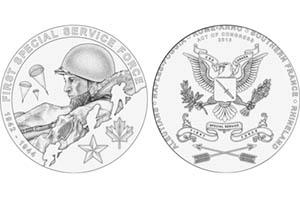 The CCAC recommended for the obverse of the First Special Forces congressional gold medal a design showing a soldier in an Arctic mountain scene; the endorsed reverse features the unit’s insignia.

Few laws authorizing new coins comes with as much detail as Rep. Steve Womack, R-Ark., packed into his 2012 law creating a set of three coins to honor the U.S. Marshal’s Service on its 225th birthday in 2015.

Not only does the law spell out what should be on each of the six sides of the coins, it also offers a daunting challenge.

The designs should be “reminiscent of the dramatic and beautiful artwork on the coins of the so-called ‘Golden Age of Coinage,’?” the law says.

So when the U.S. Mint offered 47 designs for the coins — gold $5 half eagle, silver dollar and copper-nickel clad half dollar — some members of the Citizens Coinage Advisory Committee were fearful that their hands would be tied.

“This program is a little unique,” is the way CCAC chair Gary Marks put it when his panel began its discussions March 11 in Washington.

The problem, Marks said, is that so few coin laws are filled with such detailed instructions as is the law providing for the U.S. Marshal’s Service coins.

In the end, however, Marks, newly named city manager of Lebanon, Ore., devised a way for his committee to have a say.

Here’s what the panel recommends:

??Half eagle obverse — A five-pointed U.S. Marshal badge set against a western mountain range and carrying the words: “225 years of sacrifice.”

??Half eagle reverse?— An eagle with a U.S. Marshal shield on its breast and a draped flag resting across the eagle’s right wing. Near the eagle’s left talons, a scroll carries the words: “E Pluribus Unum.” The design also carries the wording “Justice Integrity Service” along the rim.

??Silver dollar obverse?— A five-pointed U.S. Marshal badge with silhouettes of western Marshals Service law officers riding across the bottom of the badge, with the words “In God We Trust” below, and the year 2015.

??Silver dollar reverse?— An image of a gritty marshal of the old West, clutching a “Wanted” poster and surrounded by the words “Justice Integrity Service” in an olden type face. )

??Copper-nickel clad half dollar obverse?— A present-day female marshal in the foreground, wearing an armored vest, and an Old West marshal with horse and gun in the background. The panel voted to urge the image of the woman be increased and her facial expression made stronger.

??Copper-nickel clad half dollar reverse?—?A collage showing symbols related to the U.S. Marshals Service: a badge resting on a copy of the Constitution, an 18th century whiskey jug (for the service’s role in the 1794 Whiskey Rebellion), railroad tracks (to invoke its role in the 1894 Pullman strike), schoolbooks (to show its role in ending school segregation). The panel recommends that a pair of handcuffs be removed from the design after one member said they would be seen as a symbol of slavery.

Among the provisions Womack placed in the commemorative coin law was one insuring that the first $5 million raised by surcharges on the coin would go to a U.S. Marshals Museum, to be located in his legislative district.

In its final action of a two-day meeting, the CCAC recommended two designs for a congressional gold medal to be awarded to the First Special Forces Unit, a joint American-Canadian unit that served in World War II.

For the obverse, the panel voted to show a soldier in an Arctic mountain scene with silhouettes of three soldiers climbing upward; a star and maple leaf are shown to illustrate the joint nature of the unit.

This design secured 18 points in committee voting and a design showing mountaineering, amphibious operations and a soldier in the foreground drew 15 points.

For the reverse of the coin the panel strongly supported an image of the unit’s insignia inscribed “Act of Congress 2013” and “First Special Service Force.” It had 24 points, far outdistancing other designs.

The same coin and medal designs will be placed before the Commission of Fine Arts on March 20. Their recommendations, along with those of the CCAC, will be forwarded to Treasury Secretary Jacob J. Lew.

Lew, or his designee, will have the final word on what will go on the coins and the medal.